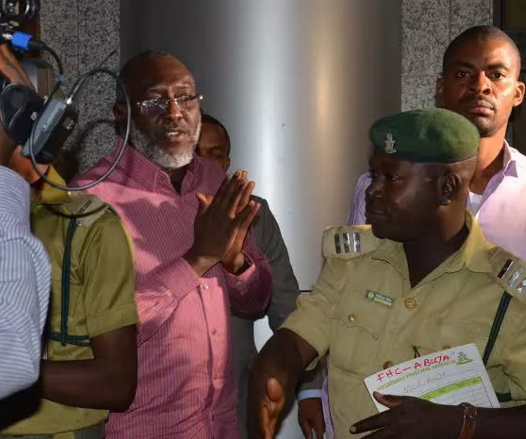 Eno-Nfon Effiong, a prosecution witness and customer relationship management officer with Diamond Bank told a Federal High Court sitting in Abuja on Wednesday that the sum of N400 million was transferred to the account of Destra Investment Limited, a company owned by Olisa Metuh, Peoples Democratic Party (PDP) national publicity secretary from the office of the National Security Adviser, NSA, on 24 December, 2014.

The banker was the fourth witness called by the prosecution in the case of corruption and money laundering levelled against Metuh by the Economic and Financial Crimes Commission, EFCC.
The revelation from the witness came after Emeka Etiaba (SAN) the lead defence counsel had opposed the admissions of a series of correspondence between EFCC and Diamond Bank as evidence and Metuh’s statement of account.

The defence counsel had pointed out that one of the letters from Diamond Bank carried 15 January, 2015 date, indicating that it was written over a year ago. He also pointed out that the documents were not certified and were not signed by appropriate persons.

While describing the date on the letter as mistake, the prosecution counsel argued that the letter was a reply to a request from EFCC made through a letter written on 30, December, 2015.
He described the objections of the defence counsel to the documents as mere frivolity which the court should not concern itself with.

The prosecution counsel also argued that there is no need to certify the documents as they are private documents of EFCC and Diamond Bank. In his ruling, Justice Okon Abang dismissed the defence counsel’s opposition to the documents.
The Judge noted that the fact the letter was wrongly dated does not affect its admissibility, though it may affect the weight attached to it by the court.

He added that defence counsel can also make the letter an issue in their final address to the court.
The Judge also declared that documents issued by Diamond Bank and EFCC are public documents that do not need any certification.

He, therefore, dismissed defence objection to the admission of the evidence.
While being led in evidence by the prosecution counsel, the witness who claimed she was the manager of all the accounts owned by Metuh and his company Destra domiciled in Diamond Bank said on 24 November, the sum of N400 million was credited into the account of Destra Investment Limited with narration: CBN//cimts\nat security-adbis.

When the prosecution counsel asked her the meaning of the narration in simple terms, the witness said “it means it is a credit from the office of NSA.”.
She said before the inflow from the office of the NSA, about N6.6 million was in the account.

Under cross examination by the prosecution counsel, the banker said Metuh has five accounts with Diamond Bank.

She also agreed with the defence counsel that Metuh is considered a high networth individual by the bank.

The trial will resume on Thursday.