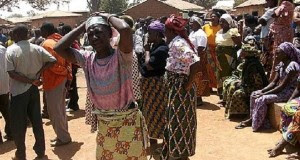 January 27,2016 – Woman Kills Her Newborn Baby Girl After Delivery, Drops Her Corpse In A Pot In Plateau State

A female farmer has been arrested in Plateau state for the alleged murder of her newborn baby girl.

The widow (name withheld) reportedly used a blanket to suffocate her baby after delivery and then dropped her in a pot.

She took the pot to the backyard of her home before heading to the farm.

Coincidentally, some curious children who were playing around the backyard picked the pot to play only to discover the lifeless body of the baby.

They quickly raised an alarm.

The suspect was arrested on her farm in Panyam area of Mangu today.