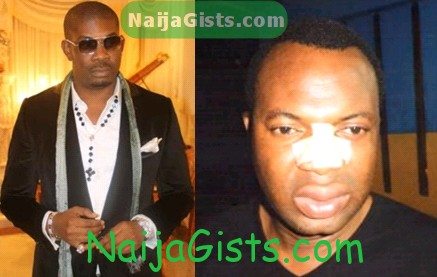 Music producer Don Jazzy is in a messy lawsuit after a Lagos-based socialite identified as Princewill Ojukwu accused him of ordering his thugs to beat him at his POP night club in Victoria Island. naijagists.com

Mr Ojukwu accused Don Jazzy of battery, oppression and dehumanization in the lawsuit he filed in Lagos state.

The socialite said he had an argument with the music producer at his night club, POP in Victoria Island which led to a messy fight. The producer was later alleged to have ordered his thugs (body guards) to beat the socialite to stupor.

Princewill Ojukwu who claimed to be suffering from severe migraine said Don Jazzy sent him an SMS requesting for his account number so as to send him money to take care of his hospital bills.

“I don’t really care about money right now, this kind of dehumanization could happen to anyone, Don Jazzy abused his power. He needs to be warned before doing the exact thing to someone else. Don Jazzy was there chatting on his blackberry as his thugs beat the hell out of me and before I knew what was going on, I had already fainted” – Princewill Ojukwu said

The victim of this violence has petitioned Inspector General of Police through his lawyers.

Find the letter below

Few hours after the release of the above letter, inside sources alleged D’banj of causing the uproar.

The source claimed D’banj is silently using this to spoil the image of the music producer.

Here is a one-sided story, let’s wait for Don Jazzy’s side of the story before we start pointing accusing fingers.