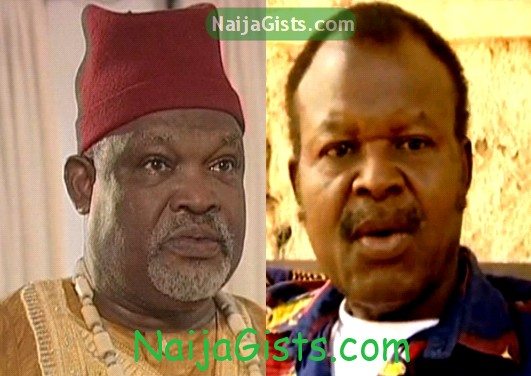 According to sources, late Nigerian actors Pete Eneh and Enebeli Elebuwa are set to be buried in January of 2013. naijagists.com

Late actor Pete Eneh passed away on November 18, 2012 after battling leg infection that led to his left leg’s amputation. Before his death, the actor has been battling the leg infection after he sustained injury on a movie set.

Pete Eneh’s injury worsened which caused the doctors to suggest a life saving leg amputation before his death.
His left leg was amputated on the 24th of October but as fate will have it, he gave up the ghost before his discharge from the hospital.

Enebeli Elebuwa died on the 4th of December, 2012 at a private hospital in New Delhi, India where he has been receiving stroke disease treatment  for over a year.
Enebeli Elebuwa who came from Upkane in Otagunu LGA of Delta State Nigeria joined nollywood in year 1967 in a movie titled Mirror in the Sun.

His treatment in India was sponsored by Delta State government.

The late actor was a popular police officer in Village Headmaster, one of the most popular soap opera TV series in Nigeria in the past.

The late Nigerian actors will be buried next month.

Stay in touch with NaijaGists.com for their burial details.

May their souls continue to rest in perfect peace