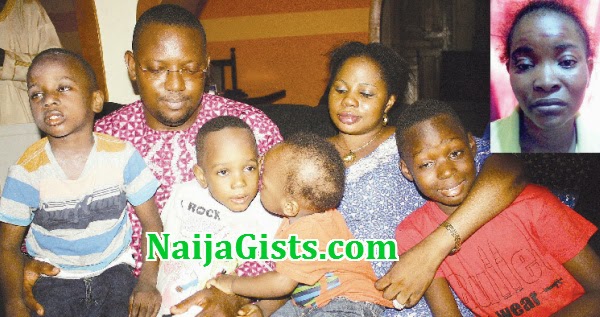 The father of the 3 children kidnapped by their nanny in Surulere Lagos, Mr Leke Orekoya yesterday advised parents to dedicate more time to cater to their children.

The banker whose children were rescued on Tuesday night spoke with reporters at his home in Lawanson area of Surulere yesterday.

Mr Orekoya said he’s very happy and overwhelmed with joy when he saw his 3 children alive.

“On sighting our children , we rushed them down to the Police College Hospital for a necessary check-up.

“We passed through a traumatic experience for almost one week when we were still searching for our children.

“Then, I remembered how I used to bond them together when they were around; I could not sleep at all; I think about how my children could come back alive.

“Although we knew that they were going to be released that day we saw them, but we were not given the actual time before they were finally released around 10.30 p.m. in the night.

“We were called to go and get them at Egbeda and when we got to the place, it was an uncompleted building and they were there naked.

“We took them to the hospital for treatment before we brought them back home,’’ Orekoya said.

He added that the family had been subscribing for the services of a nanny through OLX for over three years and never had any complaint.

“We got our first Nanny from OLX and she stayed with us for more than two years until she decided she wanted to leave.

“We got the second one who spent three months and told us she wanted to go and spend Easter holidays at her home town and we realised she was not coming back again.

“It was then we decided to subscribe for another one who spent less than two days when she perpetrated this evil.

“We cannot charge OLX because it was only a platform for you to meet or transact any business.

“We ought to have done thorough check before we finally accommodated her,’’ Orekoya said.

His wife, Adebisi Orekoya said she is yet to fully recover from the traumatic experience.

“This is not our first time of hiring nanny from OLX and they did fine but the way I see this one, I think she is a professional kidnapper.

“The way she performed on the first day, in fact, she behaved well, cleaning and taking care of the children and thus leaving no chance for suspicion.

“It was her behaviour that convinced us that she was a very experienced nanny and left us with no reason not to allow her to take care of them before the incident.

“I advise that people should do a thorough check before hiring a nanny,’’ Adebisi said.

The Orekoya family declined to state the amount of ransom that was paid to the kidnappers.