Harvey who is a popular critic of the LGBT (Lesbian, Gay, Bisexual and Transgendered) Community was a speaker at the Bringing American Back to Life Convention  where she alleged that LGBT community was created by God to judge all abortions.

“You may have thought these were separate issues, but they are foundationally connected. One has to consider, first of all, the horrifying possibility that this complete sexual and human identity meltdown could be an aspect of God’s judgment on us for aborting millions of our children. We won’t know until we see him, but it is very possible that as an instrument of God’s judgment, he is using the punishment to come on us through our children, the corruption of our children. Even more horrifying, we are letting it happen.”

‘God has given us a quick way to assess the worth of two males or two females; these avoidance and substitution relationships involve not literal or symbolic life creation, but the opposite.

‘They involve the waste functions of the body or empty relations with spilled sperm or substitutes for the male organ.

‘You get the idea. They are dead-end, degrading passions.’ Continuing on her theme, Linda said that gay relationships yielded ‘no life’ and said they were often responsible for ‘disease’.

‘It’s the recipe for personal, societal, cultural, and spiritual disaster. ‘Death is the central driving force for the abortion movement—the death of a person. ‘Death and the absence of new life are also the connection among the LGBT movement. ‘Without the rejection of heterosexual norms— husbands and wives who create babies—the LGBTQ movement has no reason to exist.’ 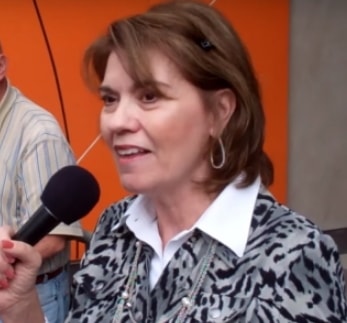 Hear her in the short video below

Continue Reading
You may also like...
Related Topics:children, gay, turning