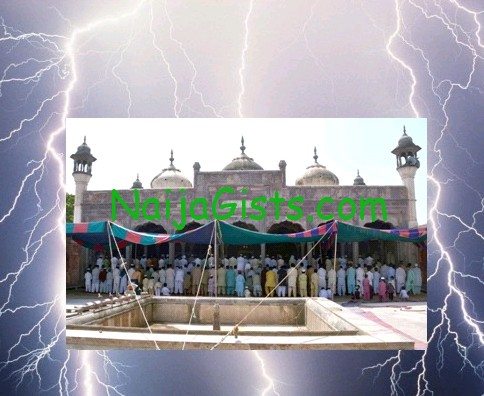 A lightning strike at a mosque in a remote village in Bangladesh has left over 13 people dead while others severely injured on Friday August 10, 2012. naijagists.com

According to AFP report, the locals were holding a special Ramadan prayers when all of a sudden the lightning struck the mosque.

The chief Imam was among the first people killed in the lightning strike that hit the flimsy tin & thatch building at Saraswatipur village, Bangladesh.

About 35 people from the village, which is in the lake district of Sunamganj, were holding prayers known as taraweeh, offered during the Muslim holy month of Ramadan, when the lightning struck, police chief Bayes Alam said.

“All 13, including the Imam, died on the spot. The bodies and faces of some of the victims were burnt,” Alam told AFP, adding that at least 15 people were injured, including six who were hospitalized. Sapa-AFP

In some African countries, they’ll say the gods are angry.

May their souls rest in peace!