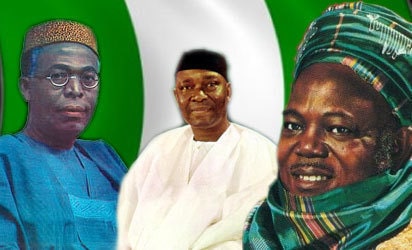 It was Martin Luther King Jr. who said, ‘We must learn to live together as brothers or perish together as fools’.

If we do not live together as brothers, embracing one another, loving one another, the only alternative is to give our enemies the rule over us, in which case we must be ready to succumb and expire. When the colonial powers came to Africa, their strategy was to divide us before they could conquer and rule over us. This time I see that some people want to fasten the process, such that we ourselves divide into small groups and nations so it’s easier for outside forces to again conquer and rule over us. As it is now Nigeria is the biggest black nation on earth, can you imagine how excited some forces will be that the only large black nation has fallen apart? Indeed since we can’t live together as brothers, we must perish as fools. The high price of not learning to live together is outside domination as it happened with colonialism.

Let us be convinced of this, the lines that divide the human race is very blur, so blur that they are almost non-existent. It takes a bitter heart to see these blur lines or emphasize them. It takes a divisive heart to emphasize the gulf between his neighbor and himself. It is a contentious and discordant mind that keeps drawing the boundary between himself and others. What we should work towards in Africa is not breaking ourselves into small segmentations, we should rather endeavor to build one large United Nations Of Africa. Only then can our race survive and be competitive in the near future.

Yes we have our differences even siblings have their individual differences just as nations do. But if those differences among siblings are placed under a microscope, they could become huge. So huge in fact that siblings have been known to kill each other at some points. Some siblings became such bitter enemies that they never wanted to see each other again for the rest of their lives. The problem is not that the differences between them is uncommon to other siblings in the world, the problem is their state of mind and how they chose to see their differences. Instead of them to see their strengths, they chose to focus on their dividing lines.

The rivalry between twins who shared same umbilical cord from the womb could be so stretched that they become sworn enemies. Because they chose to see differences, instead of the beauty in their diversity. No tribe, or people group is perfect, including ours. The Yorubas are the biggest single ethnic group in Nigeria, so if anyone should take responsibility for the state of Nigeria today, it should be we the Yorubas. Some agitators so much emphasize our differences that they go to the ridiculous length of saying that it’s only Fulanis ruling over the rest of Nigeria. What then happens to all the years a Yoruba man ruled Nigeria. What of the governors who rule their states, don’t we have Yoruba senators and representatives, what of government ministers who come from every single state in the nation? To say only the north has ruled Nigeria is not to be honest in the least, mostly it’s mischievous.

I dare declare that if the agitation for Oduduwa Republic succeeds leading to separation, these agitators will soon realize that they have another problem in their hands. Hope you can guess what the immediate problem would be. Their new country will begin to see more and more divisions, either through a fight for power, or through the habit of emphasizing differences. It only seems the Yorubas are united right now because we see rivals and common “enemies” to wage war against. The moment those enemies are no longer there, we will create new enemies. When there will be no Hausa, Igbo, Itsekiri, Edo, Ijaw, Benue, Idoma etc, there will be no one to cuss, kick and fight. What then happens? They will look for the next target of hatred, leading others to again want to separate from the new nation. The new target of hatred will be other Yorubas who are among them, but different from them. Perhaps the first fight will be over where the new country’s capital city will be situated. Ogun state people will not agree to have the capital city in Ibadan. Lagos will not want to give up that right. Ondo will feel entitled. Ife will claim to be the origin of all Yorubas, thus cannot afford to have the capital city anywhere else. Ilesa will claim that Ife is wrong and wants to point out its own place in history. Osogbo will claim that Ilesa does not know what she is saying. Ilorin will lay claim that the capital comes to her, else she will go with the north. Thus, the trouble continues.

What about problems of choosing who will be president? Have we forgotten so soon how Obafemi Awolowo wanted to be President of Nigeria and the first people who sabotaged his ambition were his own kinsmen? Have we forgotten about the bloodshed in Ibadan and other parts of western Nigeria commonly called ‘Operation wetie’, a fall out of disagreements between Obafemi Awolowo and Ladoke Akintola, two brothers, in which countless lives and properties were lost. Have we forgotten quickly how ‘operation wetie’ eventually degenerated so badly that the central government had to take over western government ordering a state of emergency? Have we forgotten about the killing of both the Premier of the Western Region, Ladoke Akintola and Prime Minister, Tafawa Balewa that happened within this same period, eventually leading Nigeria into her first civil war? Balewa’s body could not even be found for days, before his decomposing body was eventually found in an inglorious state. Was it not a fellow Yoruba man who served as judge that sentenced Awolowo and his comrades to jail? Yes, it was a Yoruba man who sentenced Awolowo to jail. His name was Justice George Sodeinde Sowemimo. After a 10-month trial of Awolowo and his comrades, the judge gave an 8-hour judgement, part of which he pronounced with his mouth the following words;

“…. Whatever others may say, this is my personal view. I am not speaking as a judge but as a Nigerian. Here we have one of the first Premiers of the autonomous region standing trial. If you were the only one before me, I would have felt that it was enough for you to have undergone the strain of the trial. I would have asked you, but I am sorry, I cannot do so now because my hands are tied…’ and subsequently sentenced Awolowo to ten years in prison. In other words, he did not find Awolowo guilty but yet went ahead to condemn him to jail because ‘my hands are tied’.

Even now, I have tried to listen to the frontline voices who are agitating for Oduduwa Republic. They are all saying discordant things. There is no coherence in their arguments. Oduduwa Republic has not been declared, yet they have started fighting themselves. Sunday Igboho says one thing, while Aare Gani Adams says another, then Afenifere have their own distinctive position. Even between Igboho and one of his lieutenants called Mr Koiki, they don’t seem to be capable of speaking with one voice. I won’t even bother referring to the social media campaigners, those ones are even much worse. There is no single one of these agitators that I have listened to that seem to agree with another of his supposed comrade. They are either calling one another fools and bastards or accusing one another of being a sell out. Some of these agitators even have the brazen audacity to abuse kings, call royal fathers names etc. There is no decorum, no culture, and most importantly no evidence of “Omoluabi” in them. There is no outline of how things will work, no agenda, no program, no master plan for the new nation. In all their many talks and speeches there is no trace of any developmental strategy for Oduduwa Republic that will convince a thinking person to buy into the agenda. No, it’s all noise, curses, abuse, more curses, and threats.

Show me a single Yoruba agitator who has a blue print of how things will work in Oduduwa Republic in the next fifty years. Let any one of them give me a list of the values that are responsible for national growth and development of a country. Making a country work is beyond rebellion, disagreements, anger, emotions, zeal, calling people names, rudeness etc. Making a country work involves having a clear blue print, developmental strategy, cohesion and collaboration with other people, both domestic and foreigners inclusive. That is how to make a country work. There has to be a vision casted, goals set, proper execution and willingness to work with others. Without this, you can as well kiss a peaceful country goodbye. Everyone always thinks he is better until he has to stand alone. Our weaknesses as Yoruba nation is not exposed yet because we are in a Republic with the strengths of others. The moment we are made to stand all alone, our weaknesses comes in full glare of the world. It is when Hausa and Fulani people leave that we will see how much blessings they have been to us, when the Igbos go then our eyes will open to what a blessing they were to us. I remember when Nigerians were calling Ghanaians to go “ghana must go”, today it’s the other way around. It’s now Nigerians that are begging to go and stay in Ghana. I hope one day we won’t get to a place where we will be begging to go to the north or to the east for a better life.

I am not just going to foolishly follow a man’s call just because he has the effrontery to call out people in power and declare Yoruba is ready to go their separate way. That may be good for activism, but activists rarely make good administrators themselves. Put activists in power, they will often do worse than those they criticized. History has repeatedly proven this.

There’s no single conversation that I have listened to where the agitators of Oduduwa Republic are not abusing others or cussing one another. They are either battering the elders and kings who disagree with them or they are placing a curse on other Yoruba people who do not agree with them. When they are not doing this, they are abusing the governor or the President? Is that the way you are going to build a new country? Show me the way you are going to build Oduduwa Republic in numbers and statistics. Convince me on how you will make Oduduwa Republic a first world country with imperial evidences. Show me how Oduduwa Republic will be a better place to live in than the Nigeria now. Show me the track records of your new leaders who will do better than those ruling Nigeria presently. Until I see emphatic and superior arguments of how the new Oduduwa Republic will do better than all similar African nations around please count me out of your mirage.

Oduduwa Republic Is Dead On Arrival. Yoruba Is Better Off In Nigeria
Hausa, Fulani, Igbo Not Yoruba Problem. An X-ray Of Yoruba People