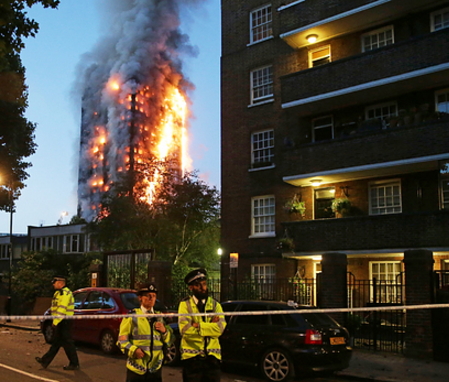 UK authorities say the death toll from the London tower block fire has risen to at least 30 and police are considering whether criminal offences had been committed.

“We know that at least 30 people have died as a result of this fire,” said Commander Stuart Cundy, adding that the figure was expected to rise.

He added that 24 people were still in hospital and 12 were receiving critical care.

“The investigation will look in into what criminal offences may have been committed,” Cundy said.

In a related development, facing increasing criticism for not meeting with locals sooner, British Prime Minister Theresa May will visit those injured in the blaze in hospital.

The queen and Prince William visited residents on Friday morning after government ministers had done so.

May has even been criticised from within her own Conservative Party for not doing so.

She has pledged to hold a public inquiry into the fire that killed 17 people with dozens still missing after it engulfed a 24-storey social housing block in West London, and expressed her sorrow on television after meeting emergency services personnel.

“She wanted an entirely controlled situation in which she didn’t use her humanity,” former cabinet minister Michael Portillo told the BBC.

“She should have been there with the residents. You have to be prepared to receive people’s emotions, and not be so frightened about people.”

Asked on Thursday about why she did not meet locals, May said she wanted to be briefed by the emergency services.

The Sun newspaper said 65 people were now feared dead or missing. London police expect the toll to rise but it could take months to search the building and identify the victims.

Locals were expected to stage a march in Kensington, where social housing tenants live cheek by jowl with billionaires in one of Europe’s richest districts, from 3 p.m.

A rally to demand justice for the victims was due to start in the government district of Westminster at 1700 GMT.

The disaster has prompted an outpouring of generosity, there was also anger at politicians as the charred tower was cast as a deadly symbol of a divided society.

British newspapers, including those which backed May in the June 8 election, sharpened their criticism of the government.

They cited a series of unanswered issues including whether the cladding used on the building helped the blaze spread.