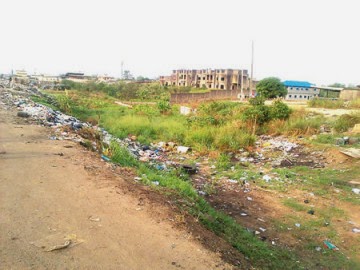 Tragedy was let loose in Ago Igbala in the Ibafo area of Ogun State on Thursday after a mentally-challenged woman was caught with a dead newborn baby.

It was said the woman, popularly called Tope, was playing with the baby at a refuse dump in the area, when a passerby saw her and raised the alarm.

PUNCH Metro gathered that Tope dropped the baby and took to her heels when a mob confronted her. She was said to have been beaten up by the mob, who reportedly chased her towards the Ibafo police station, a few kilometres from Ago Igbala.

Our correspondent learnt that Tope, who was said to be in her 40s, was later rescued from the crowd by the policemen from the station.

In a visit to the area, some residents and eyewitnesses told PUNCH Metro that Tope was mentally ill while others said she might be pretending.

One of them, Samad Kolawole, said, “I came to Ibafo five years ago and I have known her since then. According to what I heard, she has been like that for years. We were all surprised when we saw the baby with her. Probably, somebody dumped the child somewhere, and she picked it.

“Although I was not part of the people that beat her up, the rampant case of using human parts for money ritual prompted them to do so.”

A trader in the area, Mrs. Janet Fabiyi, said the child might have been used for ritual purpose and dumped in the neighbourhood.

“Some wicked parents can decide to throw away their baby just because of poverty or if they are not ready for parenting. It can also be that the baby was used for rituals and dumped,” she said.

However, an okada rider, Bashir Rasaq, said Tope might be hiding under lunacy to perpetrate evil. He said she had not shown up in the area since after the incident, adding that her paraphernalia was later set ablaze by the mob.

He said, “I don’t think she is mentally ill. She ran towards police station for safety. That is why I am suspicious of her. Since that morning till now (Saturday evening), we have not seen her, whereas she used to come here every day.”

According to him, Tope was breast-feeding the baby when she was attacked by the mob.

He said, “Yes, we have a case of such. The mad woman was seen in possession of the dead baby ─ a day old baby. We rescued her from a mob. She did not kill the baby. She just found the dead baby where it was dumped. No clue on the person who dumped the dead baby. We are still on that.”

[Reported By Hafeez Hannafi, Metro Plus]