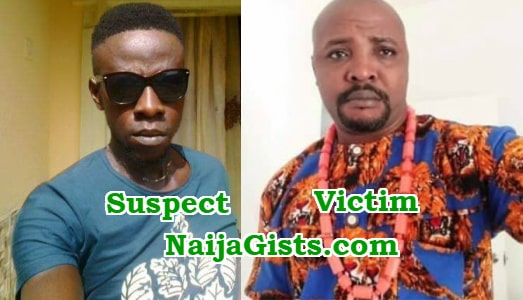 The long arm of the law has caught up with the killer of Malaysia-based businessman, Arthur Eze who was brutally murdered in his own home in Anambra state in the early hours of  Thursday the 20th of June 2019.

According to social media sources, Arthur Eze who recently returned to Nigeria after 9 years of struggle in Malaysia was killed in his own home by his jealous blood brother.

A period of festivity turned into mourning when his lifeless body was discovered early Thursday morning.

A woman who saw Eze being murdered by his brother raised the alarm that led to his arrest.

Here is what friends of the deceased, Kuala Lumpur-based Egommili and Emeka Augustine wrote about his killer.

“This is the idiot, a tout for that matter who killed my man chaii this world sef, a man with a golden heart Arthur Eze Motor may you keep resting in the right hand of God. (Onyedikachi Alhaji uchendu)you killed Your Own blood out of jealousy and envy oh my God, you will surely pay for this with all your colleagues, my club members will show you that nothing can ever hide under the sun because spirit controls the physical. Arthur Eze motor Richy jee nkeoma, your really a great man of our time.”

Finally your killer has exposed by the almighty God we serve, I know you will fish the killer out and expose him. Oh my God, what a wicked world, so your own blood brother kill you for no reason, he kill you out of envy and jealous for God’s grace upon your life after all you did for him. That man will never go unpunished. Karma is real. Ezigbo enyi ka Ajo nwanne….what a wicked world. You will forever be remembered for you are a hero and legend. I will miss you forever till we meet to part no more Artur Eze Richy ezigbow oyim(Onyedikachi Alhaji Uchendu) you will surely pay for this with your own life and anyone his or her hands is on this ugly incident. A man’s worse enemy is in his or her house.”

Here is how they announced his death yesterday.