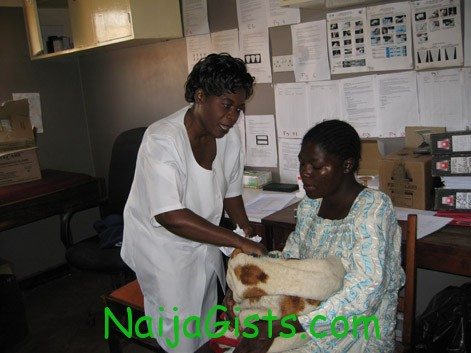 A man has abandoned his wife and their new baby in a hospital and insisted that he was no longer interested in the marriage after the woman tested positive to HIV/AIDS.naijagists.com

The man identified as John Eze married his wife, Uloma, last year and they were living happily until she became pregnant and went for a HIV test.

When she tested positive, both of them started trading blames over who first contracted the disease.

The 29-year old woman, who was abandoned at St Michael’s Catholic Hospital, Mile 12, Lagos, claimed that her husband knew that he was HIV positive and refused to go for a test.

She said she later discovered that three women he married in the past died in similar circumstance before he married her last year.

Uloma is worried that more women will be victims if he slept with them .

But John insisted he was not HIV positive because since he married her, after sex, he usually took drink Alabukun and antibiotics for protection.

The Enugu state state-born woman said that he married her husband last year and she became pregnant same period.

She said that they did not go for HIV test until she became pregnant. She said she got to know that she had contracted HIV when she went for ante-natal care at Ikorodu General Hospital and the test was positive. She went home and told her husband and advised him to go the hospital to do a test to know his status but he refused.

“What he did was to ask me to pack my things and go to my family in the village since I was suffering from the disease,” she narrated.

She added: “when I refused to go because of the pregnancy, he started maltreating me and beating me.”

She said he later drove her out and threatened that he will kill her if she comes near his house again. Uloma said rescue came her way when an NGO, Community Health Support and Empowerment Initiative took her to a hospital where she delivered her baby.

Since then she has been in the hospital because John refused to pay her bill and take her home.

When contacted John said he was actually responsible for her pregnancy, adding that he cannot stay with her because he feels irritated since she broke the news to him.

He said the marriage was over and he was willing to take care of his baby.

On why he refused to go for a test, he said he would not go for any test for now, adding that he was took antibiotics and Alabukun whenever he had sex with her, which his wife confirmed. “My chances of testing positive are slim,” he said.

Meanwhile, their matter is being handled by the Ministry of Women Affairs at the Lagos State secretariat.