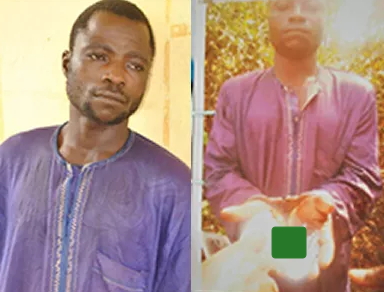 Niger State Police Command has arrested a 25-year-old man from Babana-Borgu in New Bussa Local Government Area of Niger State for allegedly cutting off the genitals of his 17-year-old cousin, Farouk Ibrahim, over N3,500.

It was learnt that the suspect, Aliyu Mohammadu, was not in good terms with his cousin before the incident.

Mohammadu, it was also learnt, had been complaining of his missing money in his room which he claimed his cousin stole.

Mohammadu told our correspondent yesterday that Ibrahim stole the N3,500 which he kept in his room but he kept denying that he ever touched the money.

He said: “By the time I confronted him on his way to farm, he told me to go and look for the money where I kept it, warning me that I should not disturb him again about it. That was when I got annoyed and attacked him with my machete and cut off his manhood.

“My cousin was very rude to me after he made away with my N3,500. He also fought with me; that was why I cut off his penis and left him in a pool of blood.”
When asked if he caught Ibrahim while stealing his money, Mohammadu said he saw him but that he ran away and started raining abuses on him.

He added: “I have no regrets over what happened; What I need is my N3,500, otherwise I am going to do more harm in the family. I have two wives and two children to carter for; I need my money to look after them.”

Confirming the attack, the state Police Public Relations Officer (PPRO), Peter Sunday, said the suspect was arrested for cutting off his cousin’s manhood by the operatives in New Bussa Division.
Sunday added that the suspect attacked his cousin while he was going to the farm to give food to his father, Ibrahim Mohammed.

He said: “Mohammadu used machete to cut off Ibrahim’s manhood and he was rushed to a specialist hospital in Ilorin, Kwara State where he is currently undergoing treatment.”
The PPRO added that the suspect would be charged to court after investigation.