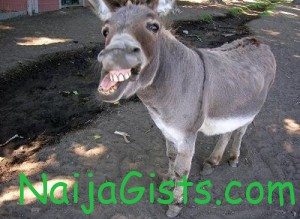 A man identified as Anayochukwu Okarih has been arrested for allegedly having the carnal knowledge of a donkey that belongs to his neighbour in Umuhu, Eha Amufu area of Enugu State Nigeria. naijagists.com

According to an eyewitness, Okarih was arrested after he was disgraced by local residents for his immoral act.

The donkey owner who reported the case to the Police, Mrs Nnedi Moses said she saw the suspects fusing his manhood into the donkey’s vagina.

She claims he might have contracted HIV and looking for ways to spread the deadly disease.

The state’s police spokesman, Mr Ebere Amarizu said the suspect had confessed but he is asking for forgiveness claiming it’s the devil’s fault.