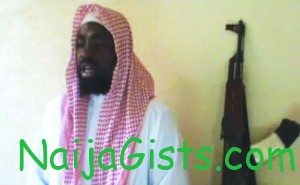 In the 9-min video recording, the Boko Haram leader said at least 10 wives of the sect’s member are currently in detention, an action which he described as demeaning.

He has threatened reprisal attacks on the wives of top Nigerian government officials.

Few days ago, JTF claimed they have killed a man suspected to be Abu Qaqa and since then, we haven’t heard anything from him.

English Transcript Of Boko Haram’s Video- Message To The World

Here is the detail translation of his message

According to him, “the message is for three purposes: all plans against Prophet Mohammed and Muslims will not succeed; the second is that they were arresting and molesting members who are just serving Allah. We did not even talk and now they have continued capturing our women. This week, about seven women were captured and we don’t even know where they are, but they are being held by infidel, enemies of Allah. In fact, they are even having sex with one of them.

“In another way, they are spreading that we are dialoguing with them, it is a blatant lie. There is nobody that we are dialoguing with. It is a lie and mischief that they are talking with Boko Haram using fake names, and they are boasting that they have found solution. It is a lie, you have not found the solution. Rubbish and useless liars, there is no single person that you have sat with.

“SSS, they are fighting Shekau in their thinking but Allah is by the side watching, and I am alive, healthy and no one had killed me. Allah is with us. We are working for Allah, and not attacking Muslims but infidels, we are not against Ummah but those against work of Allah.”

Shekau also issued a threat in a YouTube video over a United States (US)-made anti-Islam film that has sparked widespread protests in the Muslim world.

He said “anybody plotting such evil will surely pay for it. First, insults against the prophet, evil plots against him, making blasphemous movies against him, all these will do no harm to Islam.” (Tribune Ng)