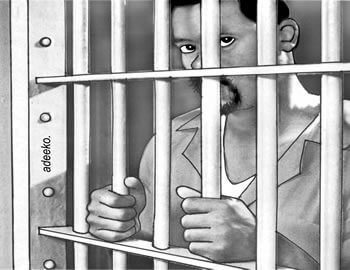 Nurudeen Fatai, a  29-year old man has been charged before an Ejigbo Magistrates’ court for flashing phone torchlight at the palace of an Oba at night.

Fatai committed the offence, seen as sacrilege at the Oba of Ijegun’s Palace in Ijegun land in the outskirts of Lagos.

He was immediately arrested and handed over to the police at Isheri Oshun Division and was later charged for the alleged offence.

The Divisional Police Officer, DPO, in charged of the Station, CSP Camellius Emordi ordered that he be charged for wandering and conduct likely to cause breach of public peace.

He, however, pleaded not guilty to the offence.

The magistrate A.O. Ogba granted the accused bail in the sum of N50,000 with one surety in like sum.

He was remanded in prison custody pending when he will perfect his bail condition.