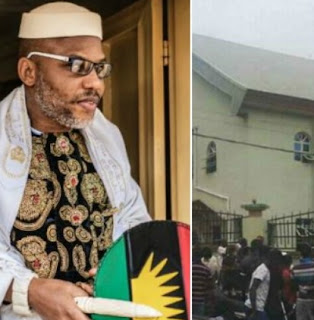 Anambra State Lawyers in Defence of Democracy has called out IPOB leader, Nnamdi Kanu, following his push for people of the state to boycott the Nov. 7 election in the state, alleging that the Biafra group was behind the killings at St. Joseph Catholic church in the State.
The lawyers described Nnamdi Kanu as an anarchist, while accusing him of trying to cause anarchy in the country.

They called on security operatives to deal decisively with the organization before it would plunge the country untold conflict.

In a letter addressed to the Anambra State governor, Willie Obiano and signed by its convener, Johnmary Jideobi, the lawyers said IPOB had introduced violence in the nation’s electoral process, with the threat to disrupt the November poll in Anambra state.

In the letter titled , ‘The 2017 Anambra State Governorship Election and the imperative of ending the impunity of anarchists before it is too late ’, the lawyers said : “The leader of IPOB , Mazi Nnamdi Kanu, has taken a decision and consequently issued a directive to the effect that elections would no longer hold in Biafraland.

“No doubt, both your humble self and the members of ASLADD are all Biafrans. To this extent, it is therefore correct to state that no one man or group can lay claim to being more Biafran than the others.

“The fulcrum of this urgent letter is to express the way we feel by the strident opposition mounted by the IPOB to the conduct of the 2017 governorship election in Anambra state.

“We have chosen to write you on this, principally because we are involved. We are involved because democracy has come under imminent threat in our beloved state.

“We are involved because the future of every nation ’s democracy lies on the shoulders of lawyers.

“We are involved because lawyers are saddled with the sacred and abiding duties of enlightening the society, upholding the rule of law and defending our constitution, which is the most sacred document that holds our nation in balance and in being.

“We are involved because it is our incontestable right to contribute in defining and protecting the future in which we will live and raise our kids.

“But IPOB did not stop at that. It has now gone physical. In Onitsha, video evidence abounds how IPOB members interrupted state activities where the governor went for a football tournament.

“On another occasion, the governorship candidate of Progressives Peoples ’ Alliance , PPA , Chief Godwin Ezeemo , was confronted at a rally by members of IPOB.

“From the account of the state Commissioner of Police, it took greater restraint and discipline on the part of the governor’s security details to stave off what would have been a harvest of human casualties.

“Still recently , a coalition of militants issued a stern warning to Anambrarians, to stay away from the polls on the 18th of November, 2017 or pay dearly for daring to defy the order of Mazi Nnamdi Kanu.

“All these are deliberate acts aimed at striking terror in the minds of ordinary citizens who have made up their minds to go out and discharge their civic duty.

“It is now clear that going further to disrupt electioneering processes like football tournaments, campaign rallies and invading and desecrating the sacred places of worship as witnessed in St. Joseph’s Catholic Church, Ekwulobia, are acts clearly outside the meaning of the word “boycott.”

“Those are acts of outlawry. They are forerunners of anarchy. Anarchy is antithetical to democracy. Anarchists are anti- democratic forces that must be opposed, whether in Nigeria or Biafra land. Anambra State has values that distinguish it from the lots.

“For seeking to precipitate anarchy in the state of the iconic departed supreme leader of Biafra Dim Chukwuemeka Odimegwu Ojukwu, they are enemies of Biafraland.

“They have no respect for the cherished memories of our departed supreme leader who in his matchless wisdom established APGA as a political party in the Nigerian Federation. This is a party which IPOB leader , Nnamdi Kanu once headed its United Kingdom chapter and he has not told us what has changed between then and now.

“We wish to remind Your Excellency that as the Chief Security of Officer of this state, all the instruments and legitimate authority of the state are at your disposal. Your hand should be strengthened by this singular fact.

“May your Administration never go down in history as first democratic government that was put in abeyance owing to the declaration of state of emergency in Anambra State as a result of avoidable security breaches.”