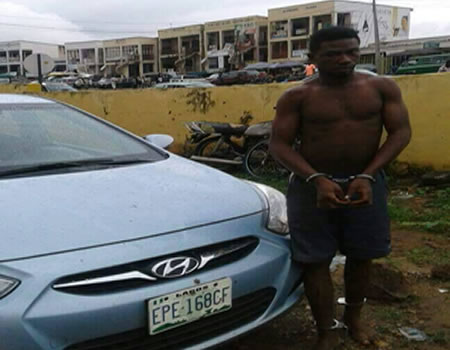 A manhunt launched by the Kwara State police command, has led to the arrest of a middle aged man on Friday in Ilorin, who reportedly hijacked his church member’s car with a 12-month old baby on Thursday night.

Tribune reports that the car was hijacked after the victim agreed to help the suspect who attends her church, to Diviland area of Gaa-Akanbi. However, midway through their journey, he brought out a knife and asked the victim to alight, and reportedly drove off with the baby who he abandoned at Akerebiata area and drove back to Asa Dam area, where he parked to spend the night with his girlfriend.

The lady who narrated her ordeal to newsmen, said;

“We had just finished the communion service and then this man came up to me asking that I help him up to Diviland, which is just near my own house.
I agreed to help him and just as I took the turn to our house immediately after Diviland, he brought out a knife and asked me to surrender the car.

I struggled with him for sometime because I noticed that the knife he carried was not a very strong one but there was nobody to come to my aid. He later pushed me out and that was when people around realised something was wrong so they came but he had already sped off.”