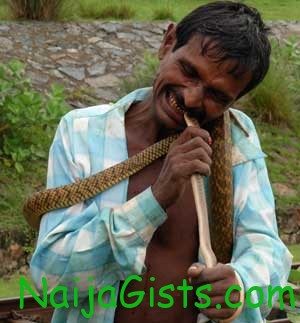 A Nepalese farmer, Mohamed Salmo Miya has done what others’ll call absurd by angrily biting a snake to death after an attack on his farm. naijagists.com

According to police report, Miya took it upon himself to revenge by biting a deadly cobra to death.

On this fateful day, Miya was on his farm which is about 125miles from SE of Kathmandu when he was attacked by a deadly white cobra.

After the attack, Miya quickly chased the snake and bite it to death.

Farmer Miya has been treated for minor injury and he is now recovering at his home.

Here is a recap of his encounter

“I was very angry after the snake bit into me. Then I followed the snake, grabbed it and bit it to death,” the 55-year-old told the Nepali-language Annapurna Post.

According to report, the kind of snake Miya killed accounts for majority of bites and is a semi-god being worshiped by Hindus in Nepal today.

This is strange! For more strange news stories, visit https://naijagists.com/strange-bizarre-news/