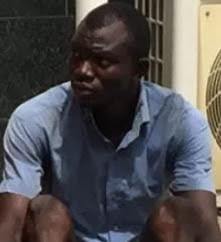 January  12, 2018 – Man Bites Off Wife’s Nose For Drinking Stout & Partying With Other Men

A boutique owner in Lagos  has been remanded in prison custody for allegedly assaulting his wife on Lagos Island.

The accused, 34-year-old Bisi Adebiosu, a resident of 34 Verimacqueen street, Lagos Island allegedly attacked his wife on the 9th of January 2018 when she abandoned her children and went partying with other men.

According to police prosecutor, Inspector Thomas Nurudeen, Adebiosu beat his wife up and bit her on the nose out of anger.

He added that the couple whose marriage clocked 10 last year got into problem when the wife, secure a job as an auxiliary nurse.

Here is what the accused remanded at the Ikoyi prison told Chief Magistrate Kikelomo Ayeye in court today:

Justice Ayeye adjourned the case till February 12, 2018 for hearing.