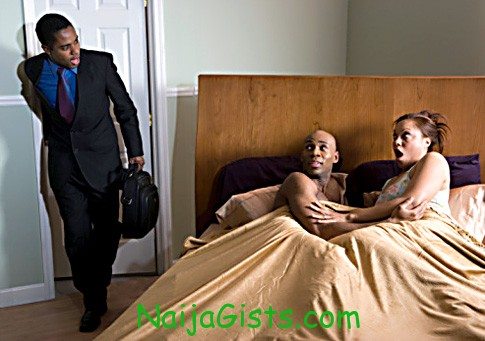 The police at Ejigbo Division in Lagos State, Southwest Nigeria, yesterday arrested a housewife along with her lover after the woman’s husband caught them having intimacy in his house.

The man fled and left behind his pant and handset which the police recovered as exhibit and took to the station.

The woman identified as Rose Emeka allegedly brought her lover, Duke Oghiakhe, to her matrimonial home after her husband, Emeka, left their house at Benson Street, Oke-Afa Isolo, Lagos.

The couple got married five years ago without a child which has been a source of worry for Rose.

The woman and her lover locked their apartment and were having sex in the afternoon before her husband suddenly returned home and caught them in the act.

According to Emeka, he went on his business trip and later returned home at about 2.00 p.m yesterday to collect some money to make some payment.

He said on getting back home, he discovered that the door was locked and he decided to use the spare key with him to open it.

He said when he tried to open the door, he discovered that it was locked inside.

“I started knocking and called her to open the door for me. Suddenly, I heard a loud sound inside and was wondering what was happening,” he narrated.

He said when she later opened the door, he discovered that the back door was forced open, indicating that the man fled through that door.

“I started asking her who was with her in the house.”

He said when he looked around the bedroom he saw an underwear belonging to Oghiakhe and his wife’s pant.

The man also left his handset behind while he was escaping.

Emeka said he started beating his wife and she begged him and told him that it was Oghiakhe that was with her in the house.

He said that he inserted his finger into her private part and noticed some sperm coming out.

He went to the police station and reported the matter and the woman and Oghiakhe were arrested and detained in the cell.

Emeka is now claiming that they have stolen the N300,000 he kept in the house because he could not find it anymore.

The woman in question told reporters that she had married Emeka for five years and they have no child.

She admitted that she was with Oghiakhe inside the house when her husband who told her he will be travelling suddenly returned home.

She denied that he was having sex with Oghiakhe but could not explain how his underwear was found in their bedroom.

Efforts to speak with the DPO on the matter proved abortive because his aides said he was busy.

A source at the station confirmed the incident saying, “as you can see the suspects are in the cell and the police have commenced investigation on the matter.”

Oghiakhe admitted that Emeka was his friend and declined to make further comment on the matter, saying that he was not in the mood to speak further to our reporter.

Younger Nigerian Men Are Fond Of Dating Older Women
5 Things To Never Say To Someone You Love, Even on Valentine’s Day