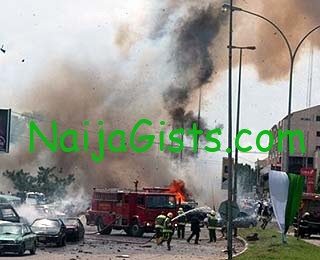 The latest news on bomb blast cases in Nigeria is that a bomb has exploded in Maiduguri at the west end roundabout today. naijagists.com

An eye witness said a large bomb exploded around 10am and a second bomb blast was reported at Sabon Layi area in Gwange Ward.

The bomb blast has been confirmed by JTF spokesman, Lt Colonel Musa Saqir.

Another witness confirms that stray bullets from soldiers has wounded a woman and killed a baby strapped to her back.

The witness, who spoke on condition of anonymity out of fear for his safety, said he saw soldiers shooting after an explosion hit Maiduguri city Tuesday.

It remains unclear if others were shooting back.

Army spokesman Lt. Col. Sagir Musa said he was unaware of the shootings of the woman and child.

He said soldiers shot dead a man who was pushing a wheelbarrow that contained explosives. He added that nobody died in the blast.

No group has claimed responsibility for this attack yet.