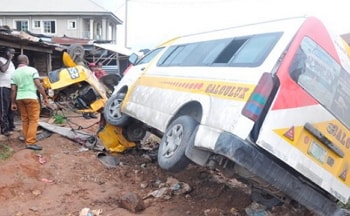 A yet to be identified man was today crushed to death by an Honda Odyssey car marked AAA 589 FV at Adedero village on the Abeokuta -Sagamu expressway in Ogun.

Akinbiyi said that the accident occurred at about 11a.m.

He explained that the dead male victim, according to an eyewitness, was on video call while crossing the road and got knocked down by the Honda car.

” We learnt a commercial Mazda car in which the deceased was driving in was on its way to Ajah in Lagos from Kuto park in Abeokuta when the driver noticed it had ran out of fuel.

“The driver had to park off the road to go and purchase fuel while the passengers in the vehicle waited for his arrival.

“Since there is a road diversion along the Abeokuta-Siun-Sagamu Interchange due to ongoing reconstruction, the deceased decided to cross to the other side of the road for safety.

“However, when the driver of the Mazda car came back and had refilled the vehicle, the deceased, while crossing the road back to the car was making a video call oblivious of the fact that a vehicle was coming from the Sagamu end to Abeokuta.

“The vehicle, which was an Honda Odyssey, hit him and he died on the spot,” he said.

Akinbiyi said the man’s corpse had been deposited at the morgue of the General Hospital, Ijaiye, Abeokuta.

Continue Reading
You may also like...
Related Topics:man crushed to death car abeokuta