A man died today after falling through an empty lift hole in Benin city.

The victim identified as Moses Airiagbonkpa fell from the lift hole from the 5th floor of the Edo State High Court building in Benin City.

The father of five, said to be in his 60s, was said to be at the High Court 10 for a case involving his community and another, when he allegedly told his kinsmen that he was going to ease himself.

One of his kinsmen, Mr. Johnson Obanor, who was with the deceased at the court, said they came to the court from Ugieowen Community, in Oredo Local Government Area of the state.

Obanor further told journalists that after their lawyer informed them that their case was no longer going to hold, the deceased decided to go and ease himself but failed to return at the expected time, which he said prompted them to launch a search for him.

“We came here this morning, the three of us and we entered the court and sat down before the arrival of our lawyer. We later discovered that the court is not sitting. When our lawyer came, she went to the table to take a date.

“He (the deceased) got up and told us he wanted to urinate and we told him to return early so that we can go home after the lawyer has taken a date.

“We waited for a long period but he did not show up. So, we assumed he has gone downstairs to wait for us where we parked our vehicle.

“Then, I told the other man that we should go to the parking lot to check if he was there, but unfortunately we did not see him. We sat down in the vehicle and tried to contact him but he was not picking his calls.

“We decided to search for him within the premises and met a lawyer who asked us to join the crowd to climb the staircase.

“Sadly, we met our brother lying down on the floor and someone said he fell from upstairs. They traced the blood and found he got stuck (in the lift hole),” he said. 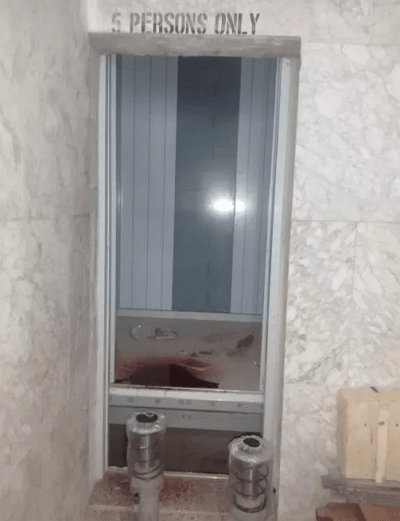 A senior staff of the High Court who pleaded anonymity, explained that the state government contracted a construction company to renovate the court building and also reactivate the lift that had been out of use several years ago.

“We used to have a lift that has gone bad and this administration is fixing it. The company carrying out the renovation work removed the old lift and is still working on it.

“We were told the man came to the court and wanted to ease himself. He went to where the lift is and fell through.”

He, however, added that there was a ribbon at the door to the empty lift hole indicating no passage.