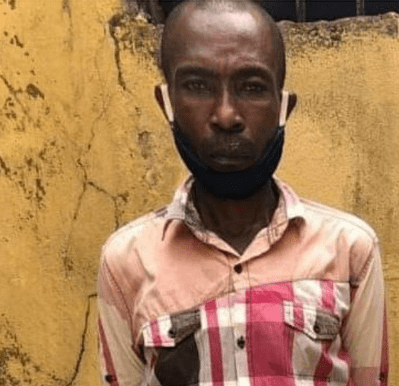 A man identified as Uchenna Egbuchulem has been arrested by the Imo State police command for allegedly raping and impregnating his biological daughter, Adaku.

47-yearold Egbuchulem is a native of Nduhu Alaenyi, Ogwa, in Mbaitoli local government area of the State.

He was said to have threatened to kill his 17-year-old daughter with a cutlass if she refused to allow him sleep with her.

According to village sources, after succeeding in violating the girl, Egbuchulem continued abusing her until she became pregnant.

Trouble was said to have started when Egbuchulem, upon discovery that her daughter was pregnant for him, decided to take her to a medical doctor in the village.

He was said to have pleaded with the doctor to buy the pregnancy and the yet-to-be-delivered baby at the cost of N200,000.

But the doctor, instead, took the girl to the traditional ruler of the community, Eze Agu of Alaenyi Ogwa Autonomous community.

Upon inquiries by the traditional ruler, the 17 years old girl was said to have admitted to the act.

Confirming the incident, the spokesman of the Imo State police command, Orlando Ikeokwu said Egbuchulem, a divorcee, had his way, after he threatened his daughter with a cutlass.

He said the suspect is currently in police custody, while investigation is ongoing.