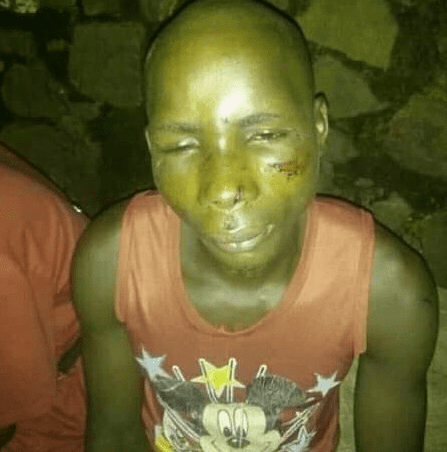 A recent victim of cult war in Ebonyi state, Sunday Oji has narrated his ordeals in the hands of cultists.

The 20 year old Secondary school student in Efikpo South LGA of Ebonyi state today said he was saved by hunters from being buried alive by the cultists.

He said the cultists had already covered him to to the head level before the intervention of the hunters.

A cult war had broken out among the some gangs in the council area, which claimed at least three persons in the past one month.

Speaking on his hospital bed in Afikpo, Oji said he was mistaken by the cult group as member of a rival group.

He said they pounced on him in his village, Ogwuma beating him to a pulp.

They then dragged him to a bush where they had already dug a grave to bury him.

Oji said that some local hunters who were in the area heard his cry for help and came to find out what was happening.

According to him, the hoodlums had already covered all parts of his body inside the grave remaining only his head when they heared movement of people approaching the scene and took to their heels..

According to him, the thugs claimed they were avenging the killing of one of their members who was shot dead recently in the area.

’’While I was in our compound, one of my friends came and told me to escort him to buy something. When we reached the store, we saw three boys with three bikes destroying and looting the shop of one guy called Imo Orji. One of them came to me and asked me where is Imo, is Imo around and I told them that I don’t know .

“Before I could know what was happening, they started heating and matcheting me with cutlass , saying that I was the one that carried the gun and shot the guy that day. I told them it’s not me and I have not carried gun before in my life.

“They said it’s not true that I’m there one. When they noticed that people have started noticing them, they bundled me into one of the bike and zoomed off and took me to the bush where they dug ground and put me and covered me with sand up to my chest. I was inside there suffocating, shouting before they heard footsteps of people coming and they ran away’’

Reacting, the traditional ruler of Umunna Autonomous community, Ezeogo Dickson Obo, described the security situation in the area as pathetic and terrible.

He called on the security agencies and government to intervene

“Security situation here in my community Umunna Community is very challenging and bad. We are calling the state government and other security agencies to come to our rescue. Suspected cultists usually beseige us, causing problems because they know that we don’t have some body to speak for us.

This is not the first time they have been attacking us. The community is feeling bad and sad on the attack of Sunday Orji. We’re telling the government to intervene”, he said.