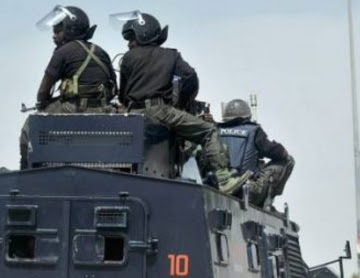 September 19, 2017 – Man Kidnapped Alongside 2 Daughters Dies In Hospital After Police Rescued Them

The Police Public Relation Officer ASP Aliyu Mukhtar confirmed that the suspected kidnappers invaded the residence of the former Chairman of the vigilante group in Shika, Sabon Gari Local Government Area of Kaduna State, Alhaji Mustapha Ghali with plans to abduct it occupants.

The Kidnappers according to the spokesman for Kaduna Police command laid siege on the property and later forcefully abducted Alhaji Ghali and two of his daughters.

However, the Police Special Response Squad stormed the area and engaged the kidnappers in a fierce gun duel which resulted in said Alhaji Ghali and two Police Officers sustained varying degrees of injury.

He further confirmed the death of the father of the abducted girls in a hospital while receiving treatment as a result of bullet injury sustained from crossfire between the Police and the kidnappers.

When the Kidnapers could not withstand the firing power of the Police, they abandoned the two daughters and flee into the bush, the Police source said.

“The Commissioner of Police, Mr. Agyole Abeh has ordered a re-enforcement of Police personnel to the area to comb the forest in order to arrest the fleeing bandits

“It is very sad that during the cross firing Alhaji Ghali was hit and pronounced dead at ABU Teaching Hospital Shika, where he was rushed to for Medical attention.

“Some of our policemen also sustained an injury and are also receiving treated at the Shika General Hospital.

“We are on the trail of the fleeing bandits and we shall bring them to justice very soon”, he said.

Continue Reading
You may also like...
Related Topics:daughters, kidnap, man