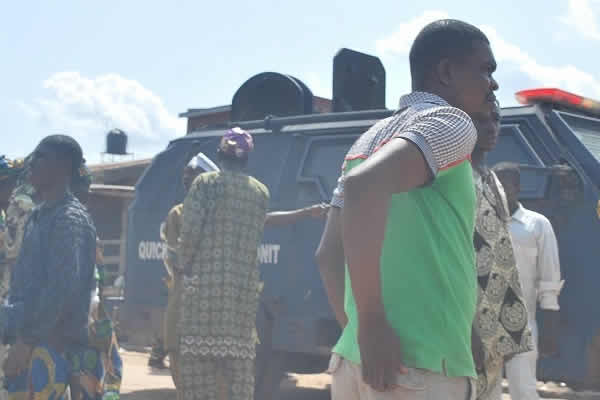 Tragedy struck on Sunday, at Edunabon, in Ife North Local Government Area of Osun State when a middle-aged man, simply identified as Kunle, was shot dead during a violence clash which ensued between two factions of the Peoples Democratic Party (PDP).

The gruesome killing, the Nigerian Tribune gathered, was the climax of the leadership tussle rocking the two factions of the PDP in the area, a development, which created pandemonium in the sleepy community of Edunabon.

Credible source informed our correspondent that the PDP in the area had been grappling with leadership crisis since the assumption of office of the chairman of the party in the council, Mr Sam Oyetade.

According to the source, a leader of the party in the state who was also a governorship aspirant of the party, was not favourably disposed to the emergence of Oyetade as the party chairman in the area and had made several futile efforts to remove him from office.

However, trouble ensued at the ward meeting of the party held at Local Authority Primary School, Edunabon at about 4.00 p.m on Sunday, when some loyalists of the governorship aspirant stormed the venue of the meeting, demanding for the impeachment of Oyetade as the party chairman.

But, loyalists of the embattled chairman confronted supporters of the gubernatorial aspirant over attempt to impeach him and the development culminated in a bloody clash between the two factions.

In the thick of the violent clash, the late Kunle was shot by one of the members of the party at the meeting and he subsequently gave up the ghost before they could rush him to the hospital.

A top Police source, who pleaded anonymity confirmed the incident, but said the Police were investigating the matter with a view to arresting the culprit behind the killing.

Reacting to the development, the Publicity Secretary of the state chapter of the PDP, Prince Bola Ajao, said the state secretariat of the party was to be briefed on the matter, stressing that the matter would be properly investigated by the state executive council of the party.