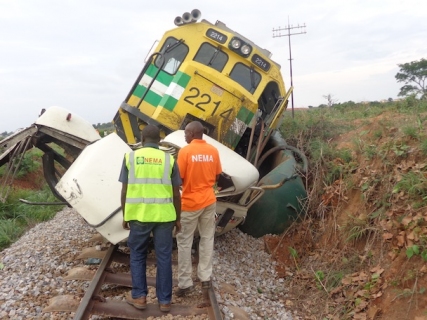 A Nigerian passenger train that took off from Kano and bound for Lagos crashed into a faulty truck late this afternoon (Nigerian time), officials of the National Emergency Management Agency (NEMA) have confirmed. The accident took place a few meters from the Kakau Train Station in Chikun local government area of Kaduna State.

Two sources said the truck involved in the accident was loaded with human waste, specifically excreta. The truck was reportedly stuck on the rail line as the Lagos-bound passengers train rammed into it.

An official at the North West Zonal Office of NEMA disclosed that the agency received a distress call after the accident. The agency’s emergency response team was then mobilized and sent to the scene of the accident to undertake rescue operations.

Eyewitnesses who spoke to SaharaReporters stated that the faulty truck belonged to Ibe Nigeria Limited. “The truck just broke down right at the rail line.

Then the moving train crashed into it, resulting in the derailment of the train,” one eyewitness said.

Neither NEMA nor eyewitnesses disclosed information about any casualties among the passengers. However, an eyewitness said four passengers sustained serious injuries. The injured were reportedly evacuated to Saint Gerald Catholic Hospital, Kakuri, Kaduna State for treatment. SaharaReporters was unable to obtain official confirmation from the hospital.

Our correspondent said NEMA officials had conducted an on-the-spot-assessment to determine the extent of the damages.