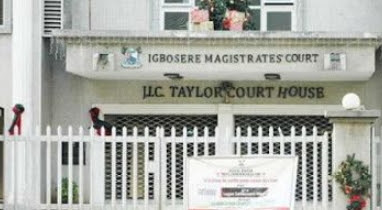 Feb 12, 2018 – Man Who Killed Neighbour By Banging His Head On Wall Charged 2 Years After

Mr Ugochukwu Chukwuekezie, a trader who allegedly killed his neighbour by banging his head on a wall, was on Monday brought before the Lagos High Court in Igbosere.

Chukwuekezie was arraigned on one count charge of manslaughter before Justice M. A. Okikiolu.

The Deputy Director of Public Prosecutions (DDPP), Mrs. A. Oshinusi, said the defendant committed the offence at about 8:00 p.m. on December 5, 2015, at No. 10, Okoluwa Street, Ebute Meta, Lagos.

Oshinusi said a fight broke out following an argument between the defendant and his neighbour, Mr. Comdavies Okeke, following which the defendant hit Okeke’s head on a wall.

Okeke slumped and was rushed to a hospital where he was pronounced dead.

According to the prosecutor, the offence contravened Section 227 of the Criminal Law of Lagos State, 2011 and punishable under same.

Chukwuekezie pleaded not guilty to the charge.

Following a disagreement between Oshinusi and defence counsel, Mr. R. Asuquo, over a pending application, Chukwuekezie’s bail application was not taken.

The court was informed that the defendant was first arraigned before another judge of the Lagos High Court, Justice Sybil Nwaka.

The case was then transferred to Justice Okikiolu following Justice Nwaka’s transfer to the Ikeja Division of the court.

According to Asuquo, the defendant filed his application on December 12, 2017.

But the prosecution claimed that it was only aware of the defendant’s December 9, 2017 application which was refused by Justice Nwaka.