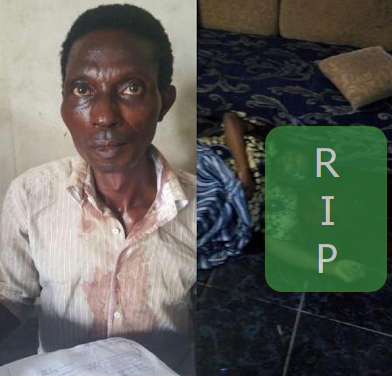 Feb 9, 2017 – Picture: Man Kills Alleged Witch Mother In Sangotedo Ajah Lagos For Not Giving Him N0.5M Out Of The N11M Late Sister Willed To Her

A man has been arrested for allegedly stabbing his elderly mother to death.

Oluwaseye Ayoola, a 51-year-old unemployed man reportedly engaged his mother, 81-year-old Dorcas Ayoola in a serious fight yesterday Wednesday the 8th of February 2017 after she refused to give out the N500,000 he requested for out of the 11 million Naira her late sister willed to her.

The suspect who allegedly axed his mother to death at her home at United Estate in Sangotedo area of Ajah Lagos before fleeing however changed the story after his arrest.

The suspect told police he went for 21 days prayer and fasting and it was revealed to him that his mother was a witch behind his failure in life.

His younger brother, Tunde Ayoola reported the matter to the police before he was apprehended.

He denied the witchcraft allegation put forward by his brother.

The body of the deceased has been transferred to the morgue.