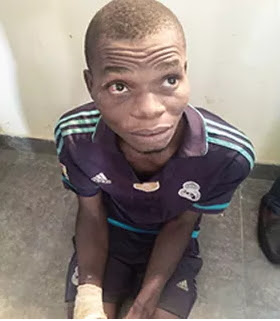 Ibanga and Esin were paraded yesterday at Police Command Headquarters, Ikot Akpan Abia in Uyo. The state Police Public Relations Officer (PPRO), ASP Cordelia Nwawe, said although the crime was committed at different locations, the police were able to arrest them based on information given by people in the areas. Nwawe said the command would not rest in its oars until criminal tendencies were reduced to the barest minimum.

She called on residents of the state to always volunteer information to enable the command to carry out its duties successfully. The PPRO said once investigations were concluded, the suspects would appear in court.

She warned parents to always monitor the type of friends their wards keep. Confessing to the crimes, Ibanga and Esin claimed they were led by an evil spirit. They both pleaded for leniency. Esin said he did not understand what happened.

He said: “I stay in Port Harcourt, I came to the village that day; I don’t really know what happened, I started quarrelling with my mother. “My daughter was sleeping. About 4a.m., I carried her to the village stream and strangled her. I cannot say how it happened.

“It was people from my mother side who arrested me. I regret my action. Honestly, I cannot say why I killed my four-year-old daughter.” On his part, Esin said he went to his uncle’s house to ask him why people were dying in his family.He said: “When I got there, I met him and the children, we exchanged pleasantries.

What really happened after that, I cannot explain.” Asked how he used machete to butcher his uncle. He said: “That is why I am pleading for leniency because I cannot say what really pushed me into doing that.”