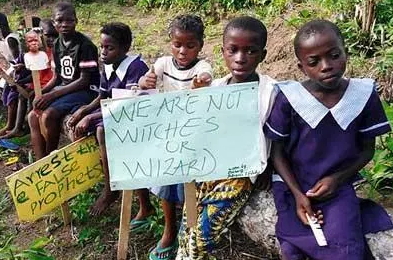 Man Kills Twin Daughters With Acid In Calabar, Says They Killed His Parents With Witchcraft

“The man told us that his daughters confessed to be witches and that he had no choice other than to kill them before they kill him.

So he mixed acid with malt, took the twins to a bush path and gave them the substance to drink.” Another source, who pleaded anonymity. “The twins were always wandering the streets. When brought back home by strangers, Festus usually chased them out again without food. Sometimes they were locked up and not given food for days.”

Investigation revealed that before the fateful day, the girls had been incarcerated for about three days before their father let them out under the pretence of taking them to school before he took them to a bush path and poisoned them.

A dying girl’s revelation An eyewitness, who craved anonymity, told Vanguard that before one of the girls died, she revealed to them that their father took them from the house to a bush path at Nyaghasan on a bike. He brought out a black substance and gave to them to drink.

She said they drank it, but because the substance was bitter, she refused the second portion, but her sister drank it.

According to the source, “she said after a while they started having stomach ache and complained to their father, who then pretended as if he was going to get a remedy and in the process he left them there and never came back. “Not too long after, they started feeling dizzy and then fell asleep. When she woke up and tapped her sister, she was no longer breathing.

“The deceased said she had to drag her sister’s lifeless body from the bush to the road. It was in the process that a good Samaritan saw them and informed the police, who then took both of them to Akamkpa General Hospital, where she died at about 3:40a.m., January 11.

When contacted the Police Public Relations Officer, Irene Ugbo, who confirmed the incident, said since the incident happened three weeks ago, they had been on the suspect’s trail.

Ugbo said: “We have apprehended the suspect; he was brought from Akamkpa this morning (Monday) to the headquarters

He confessed that he gave his daughters acid mixed with malt to drink because he had a premonition that they would kill him like they killed his parents.

“He had the belief because they confessed to him that they were witches. So he carried out the dastardly act to save his life first.”