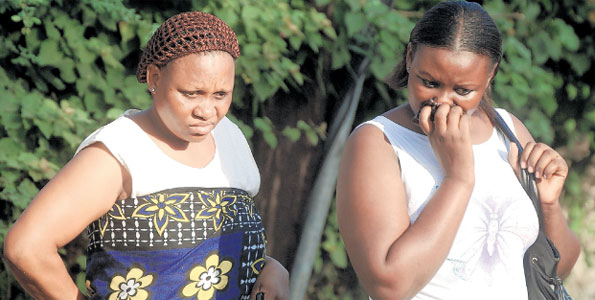 The most terrible sex related crime of all times has been committed in Edo State.

A 24-year old man identified as Ifeanyi Nwong has been arrested for allegedly defiling a 20 months old baby in his apartment.

Ifeanyi was arrested after parents of the victim (names withheld) saw her child was walking and some sperm on her.
The offence was committed at Uselu quarters in Egor Local Government Area of Edo State.
He was among 29 suspects paraded by the Edo State Police Command yesterday.
Ifeanyi was alleged to have lured the victim into his room where the act was committed.

In a chat with newsmen, Ifeanyi said his sperm only dropped on the laps of the victim but he did not penetrate.

He said, “I returned from work and was wearing my towel to go the bathroom when the girl ran to me. I carried her and my penis erected and placed her on my lap. I release sperm on her lap but people said I defiled her.”

Other suspects held for defiling minors included Elvis Idemudia who allegedly had carnal knowledge of a 12 year old girl, Stanley Edomwonyi who defiled a 9 year old fish seller inside a bush and Precious Omoruyi who allegedly defiled a 10 year old girl.
Two women, Helen Otorhila and Imuwahen Atoe, were arrested for being in possession of 280 live cartridges which they claimed they sold to hunters.
A civil engineering student of Federal Polytechnic, Ado-Ekiti, John Imhona and one Monday Evbuomwan were arrested for threatening to kidnap and kill their victims if the said victims did not pay the ransom demanded.
John said he demanded the money because cultists in his school were disturbing him to pay some money while Monday said he threatened his aunt to raise money his business.
Police Commissioner, Foluso Adebanjo said the suspects would soon be charged to court.
He disclosed that several persons have been arrested in connection to the killings of several persons at Ukhorumi community in which several buildings and cars were razed.

The anti-kidnapping law is good for now.

[Report From Osagie Otabor, The Nation]