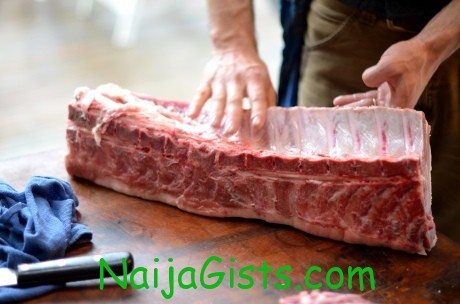 An Egyptian man who works as a butcher recently slaughtered his wife and sold her flesh as meat in his shop.

According to Arabian News Agency, after a heated dispute involving the couple, the man snaps and brutally slaughtered his wife.

He then peel her skin off the bones and cut the flesh into bits.

He later sold his wife’s flesh for Dh230 per kilo to his unsuspecting customers claiming that it was local lamb.

One of the clients who doubted the meat was not lamb informed the police who sent it for examination.

The police was astounded to see the meat was human flesh and immediately impounded it and arrested the butcher. The guilty murderer confessed to the crime adding that the flesh belonged to the wife whom he had killed.

During a raid on his shop, Police found his wife’s hip in the fridge and the rest of her body at the man’s residence.

The man later admitted he slaughtered his wife because she refused to obey him.

What a wicked man!