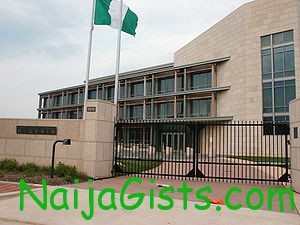 According to a report from Leadership News, Bank of America, M&T Bank and Wells Fargo received directive from the US government to close the accounts of the Nigerian embassy in Washington and its consulate in New York on suspicion of money laundering after traffic on the various accounts raised a red flag.

$3.6 million dollars was said to have entered and left the accounts in under a month, the latest transaction being the withdrawal of $50,000 in hard cash by a top embassy staff.

The decision to freeze the accounts is sequel to intelligence report generated by a panel comprising representatives of the US Department of Justice, the Federal Bureau of Investigations (FBI) and the Department of Treasury, unknown to Nigerian embassy officials, to monitor wires and traffic in all the accounts operated by the embassy.

As part of efforts to resolve the issue, the auditor-general of the federation and a team of auditors left for the US to begin auditing the accounts of the embassy. Efforts by embassy officials to open new bank accounts with other American banks have so far been politely turned down.

The US have also ignored all requests by the federal government to unfreeze Nigerian embassy’s bank accounts in Washington, DC, and New York. The move, according to sources, is setting the stage for a potential showdown between the two countries with Nigeria also threatening to reciprocate by freezing the US embassy’s accounts in the country.

Continue Reading
You may also like...
Related Topics:embassy, nigerian, washington