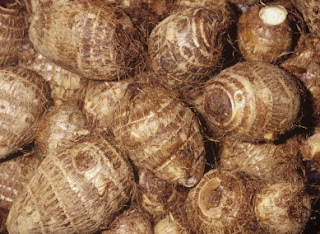 A man identified as Bosede Abiodun today appeared before an Ado-Ekiti Magistrates’ Court for alleged theft.

The 35-year-old  defendant of no fixed address is standing trial on a count charge of theft.

The prosecutor, Sgt. Monica Ikebuilo, told the Court that, the defendant committed the offence on November 23, at about 09:00 am at Odo village via Ado-Ekiti.

She alleged that the accused stole cocoyam tubers on the farm of the complainant, valued at N40, 000 belonging to one Ovie Dominic.

Ikebuilo said that the offence contravened Section 390 (9) of the Criminal Code, Law of Ekiti State 2012.

The prosecutor asked the court for adjournment to enable her to study the case file and present her witnesses.

The defendant pleaded not guilty to the charge.

His counsel, Mr Emmanuel Sunmonu, urged the Court to grant him bail, with a promise that he would not jump bail.

The Magistrate, Mrs Omolola Akosile, granted bail to the defendant ‎in the sum of N10,000, with one surety in like sum.

The hearing for this case will hold on January 15.