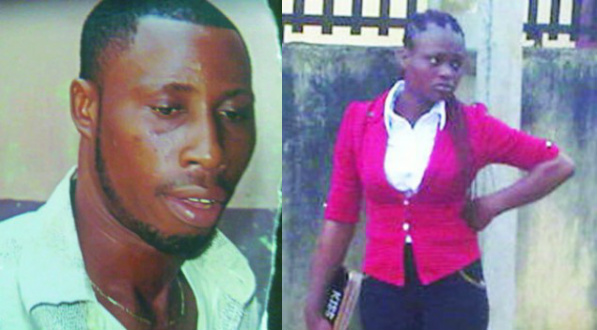 A 20-year old housewife, Mercy Ekeh, has narrated how her husband, Kelechi Ekeh, 30, forced her to marry him at the age of 17 and kept her in captivity by locking her inside their room apartment for seven months in Egbe, Lagos State, western Nigeria.

She said she was inside the room until he impregnated her and thereafter forced her parents to collect N300 as her bride price.
But her husband said his decision to keep her in the room was not intended to punish her, saying he was showing her love and caring because he did not want her to suffer in his home.

Anambra State-born Mercy narrated her plight at Eiigbo Customary Court, Lagos, where she filed a suit for the dissolution of the marriage.
She also told the court that during her captivity she was not allowed to see anybody or her parents.

She said whenever Ekeh went to work, he would lock her inside and provide a small bucket for her to ease herself inside the room.
She said she was only allowed to come out in the night briefly when he returned from work and opened the door and did not allow her do anything else.

The embittered woman said her ordeal started in 2012 when she went to sit for Joint Admission and Matriculation Examination, JAMB.
She said on that Saturday, Ekeh accosted her along Liasu road in Egbe.
Mercy alleged that Ekeh cast a spell on her after he touched her and commanded her to go to her parents’ house and bring her property and come and to live with him.

She said she obeyed without knowing what had come over her.
She said while she was in Ekeh’s home, her parents searched everywhere for her and went to the police and reported that she was missing until one of Ekeh’s neighbours who observed what was happening told her mom about where she was.

It was then Ekeh was arrested and she regained her freedom after he impregnated her.
Mercy said Ekeh later went to her parents and pleaded for forgiveness and it was then, he brought N300 and paid as her bride price.
She said the incident has traumatized her as Ekeh has ruined her life, while her mates are in school pursuing their education.

She asked the court to dissolve the marriage and compel Ekeh to take care of the baby.
In his response, Ekeh denied all the allegations and told the court that he does not want the marriage dissolved because he loves Mercy.

On packing to his house, he said it was a choice Mercy made before she got pregnant and he had to marry her by paying her dowry. The president of the court, Mr A.K. Akanni adjourned the matter till 18 June for continuation of trial.