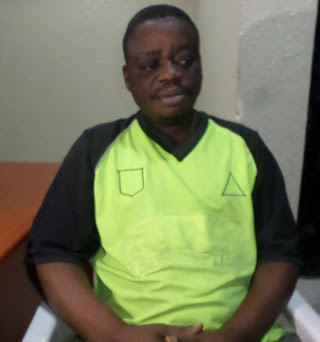 A 14-year-old SS1 student in a secondary school in Ikorodu, Lagos, western Nigeria, has narrated how her 49-year old father, Adeboye Adesola Waheed, raped her twice.

According to the teenager (name withheld), the incident allegedly happened first in November 2014 and again on 5 March, 2015, in Ikorodu area of the state.

Speaking about her ordeal, the girl said she lived with her father and other siblings in a room apartment where he allegedly raped her.

“We are six living in the room, my father, his new wife, as my mother had died while I was three years old, my younger brother and two of my half sisters. My mom gave birth to only me and my brother. It started in 2014.

He used to check my private part to see if I had started menstruating or meeting men. So as I was sleeping in the midnight, he removed my wrapper. By then, my step-mother had packed out of his house as she was accused of infidelity and dating other men in the compound.

“He inserted his finger in my private part and asked me if I had started menstruation. I said no. He asked if I had had sex with anybody, I said no. He said he would use his penis to test it. He climbed on me, I wanted to cream, but he held my mouth. I bled from that night till the following day. I felt very bad, but he warned me that nobody must hear what he did to me. He repeated it again on 5th March, 2015. He did it between 9pm and 10pm.

“He used condom in the first one. This time, he asked me to remove my clothe and lie on the bed. It was a Thursday night, I could not bear it anymore. So the following day, I packed my things and left the house. I dropped a note that he should not look for me.

I moved to a nearby church and stayed there. My uncle took me to the church and the church members brought me to the police after I and narrated what my dad did to me.”
In his reaction, Waheed initially said that the allegations against him by his daughter were not true.

The Oshogbo, Osun State-born plank seller said that after the death of his first wife, his elder sister who resides in Ibadan took over the children but had to return them because they were always going out without her consent.

“The day I was brought here, I was thoroughly beaten by men of the O’odua Peoples Congress OPC who forced me to confess that I had carnal knowledge of my daughter. But here in the police station, nobody beat me.

I told the Oga that it is devil’s work. Oga, I’m sorry, pity me, I’m from poor family. I am the only one taking care of them. Forgive me for whatever happened, I did not know what happened.”

A drama ensued when the girl held her father’s shirt and wept, saying he should say what happened.

The suspect, who is currently being investigated at the Zone 2 Police Command, Onikan, Lagos, was said to have perpetrated the act twice before his daughter raised an alarm and fled from her father’s house.
Waheed, who was on Wednesday paraded by the Deputy Public Relations Officer, Zone 2 Command, Olorunfemi Shem, an Assistant Superintendent of Police(ASP), initially denied the allegations, saying he did not know how it happened.

Even as the little girl was crying, gripping her father in tears and urging him to tell the truth, the suspect was adamant, but later attributed everything to the handiwork of the devil.

According to ASP Shem, police received a complaint of defilement of the victim by his biological father, Adeboye and commenced investigation as the child consistently maintained that she was defiled by her father.

“She said that it started sometime in November 2014 and on 5th March, 2015 she was also defiled. She was assisted by some church members who brought her to the zonal command,” said Shem.

He said the report was made on 20 May, 2015 and the man was arrested on 21 May, 2015.
In the process of investigation, Shem said the girl was taken to a government hospital where it was established by doctors that there was penetration in the girl’s private part.

He said investigation had been concluded and the suspect would be charged to court soonest.