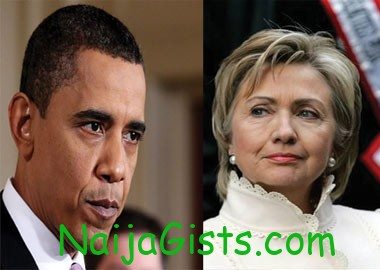 The Al Qaeda affiliate in Somalia has mocked the new $33 million bounty on its top leaders’ heads by offering its own bounty for President Obama and Secretary of State Hillary Clinton – 10 camels for Obama and 20 chickens for Clinton.

“Anyone who helps the Mujahideen find the whereabouts of Obama and Hillary Clinton will be rewarded with 10 Camels to the information leading to Obama and 10 hens and 10 cocks for Hillary,” said senior Shabaab commander Fuad Mohamed Khalaf in a statement reported on numerous websites.

Earlier this week, the U.S. offered a total of $33 million through the State Department’s Rewards for Justice program for information leading to the capture of seven different Shabaab leaders, including Khalaf, reports AFP and ABC

The U.S. offered $7 million for founder and commander Ahmed Abdi Aw-Mohamed, AKA Godane or Mukhtar Abu Zubeir, five million for Khalaf and three other men, and $3 million apiece for two other leaders.

The announcement of the U.S. bounties came as Somali and other African military forces have begun to squeeze Shabaab into a smaller and smaller section of Somalia. In a statement, the Somali government said the rewards would help crush the al Qaeda affiliate.

“The announcement from the U.S. government . . . will certainly help the Somali government’s efforts to end al Qaeda’s reign of terror in Somalia,” said Somalia’s transitional government in a statement Thursday. “This is an important juncture in Somali history, where the possibility of full recovery from years of chaos is within reach.”

In his response to the U.S. rewards, Khalaf said that “infidels” offering bounties for Muslims was “nothing new.”

“There is nothing new in the fact that infidels pay to have Muslim leaders killed,” said Khalaf. “They already did that by offering camels for the head of Prophet Mohammed, and the dollar is the camel of today.”

Khalaf was referencing a passage in the Koran in which 100 camels were offered for the Prophet Mohammed as he fled Mecca for Medina.

“I can assure you that these kind of things will never dissuade us from continuing the holy war against them,” said Khalaf.