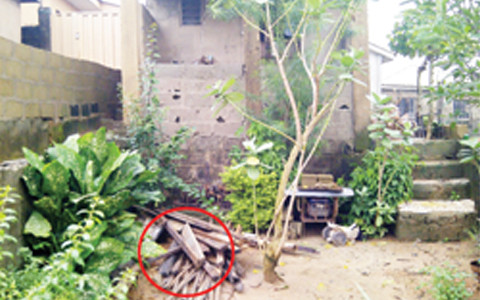 A 34-year-old man, Arogundade Ahmed, has been arrested by the Lagos State Police Command for allegedly flogging his son to death.

According to eyewitnesses, Arogundade tortured his 13-year-old son, Qudus, to death because Qudus broke into someone’s house and attempted to steal.

Arogundade was said to have killed his son in the presence of his little sister, Sherifat.

PUNCH Metro learnt that after killing the boy, Arogundade dug a grave and buried him in front of his house in Alogba Estate area of Ikorodu

Our correspondent, who visited the crime scene, learnt that the incident occurred on June 27, 2013.

It was leant that the deceased was an apprentice at a mechanic workshop in the area.

A senior police officer at Ipakodo Police Division, who craved anonymity, said, “We were told that on the said date, Qudus broke into the house of one Apoti Lateef and attempted to steal. Lateef raised the alarm, accosted the boy and then called his (Qudus) master, Idowu Gabriel.

“Gabriel and Lateef said they tied up the boy and then called his father to take him away.”

Our correspondent learnt that Arogundade took the boy home and then beat him up with barbwire, sticks and other objects for about five hours.

As the beating continued, Qudus started getting weak and later died.

According to eyewitnesses, on seeing that Qudus had given up the ghost, Arogundade called a grave digger to bury his corpse.

An eyewitness, Adekunle Adekoya, told PUNCH Metro that no one could intervene when Arogundade was beating up his son because Arogundade was a hot-tempered man.

He said, “He (Arogundade) is hot-tempered. When he brought his son home around 12pm, he beat him till about 5pm. The boy kept on screaming and we could do nothing to save him because we did not want his trouble.

“Some neighbours were also around at the time but no one wanted to interfere. After sometime, the boy just went unconscious. We did not know he was dead. It was when I saw a man digging a grave in front of Arogundade’s house around 7.30pm that I knew the worst had happened.

“I immediately called the Lagos State Emergency telephone number but no one came.”

The traditional leader of the community, Oludapo Sule, said he reported the matter to the police as well as members of the Oodua People’s Congress.

He said they were able to apprehend Arogundade at midnight.

He said, “I received an anonymous call on the day of the incident and the caller told me that a man had killed and buried his son in front of his house. I was able to meet with the landlords in the area, who confirmed the incident to me

“So, at midnight, he was picked up and taken to the police station. The matter has been transferred to the State Criminal Investigation Department, Yaba and I have written my statement.”

Sule however urged the police to ensure that Qudus’ corpse was exhumed and given proper burial.

Chairman, Alogba Estate and Palapo Town Community Development Association, Mr. Agboola Aluko, said Arogundade had been terrorising the community for quite some time.

He said Arogundade had inflicted machete cuts on Qudus before and had even threatened to kill members of the community.

He said, “Arogundade had beaten Qudus with a machete before and even almost killed his wife. That was why she divorced him. Even when he was being arrested, he threatened to deal with anyone who spoke against him.

“I have settled many disputes in this area caused by Arogundade. Even women in the area are scared of him. We have reported his bad behaviour to the police before.”

Arogundade, however, said he did not kill his son. He said his son was merely beaten after he was accosted for stealing.

The police statement on the incident read, “Upon his arrest, Arogundade said he did not kill his son. He said he (Qudus) was almost dead when Lateef and Gabriel handed him over. He said his son died soon after and then buried his corpse in front of his house and went to bed.

The police source said, “We have also arrested Lateef and Gabriel but they claimed they only tied up the boy and did not kill him. Investigations are ongoing.”

When contacted on the telephone, the spokesperson for the state police command, Ngozi Braide, said she would call back.