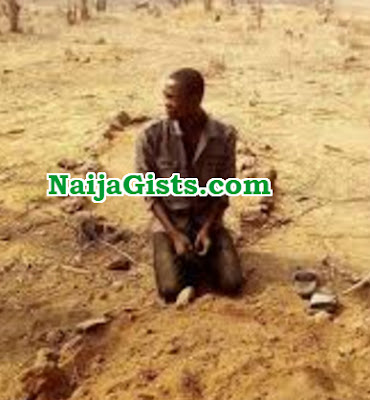 On Friday, police ordered a man accused of using his wife for ritual to exhume her corpse for autopsy.

Her hubby later buried her in a shallow grave to cover up his evil act.

According to police investigation, the deceased had earlier separated from her husband for attempting to use her for money ritual by inserting charm in her private part in 2016.

The attempt on her life eventually led to their separation but last week, she called him to request for upkeep allowance for their 3 children.

He told her to meet him at Ebute Metta where they both moved to Ijora Badia where the suspect allegedly pounced her to death. She died immediately and the suspect buried her corpse in a shallow grave before fleeing to Ibadan.

When the family members of the deceased noticed that she didn’t return home, they contacted police and Bello was arrested.

Here is what the suspect told police yesterday while exhuming her corpse:

“I killed her on Monday. If I did not bury her, people would easily link me with her death. Yet I have been caught. It was the work of the devil.”

He told police they had been married for 14 years. He didn’t say why he committed the offence.

Shakiru Bello’s case has been transferred to SCID in Yaba for investigation.