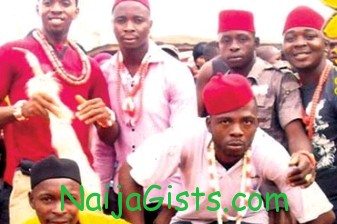 Several residents of South Ibie Kingdom, near Auchi, Etsako East Local Government, Edo State on Tuesday fled the community as fighting broke out between youths and the police. naijagists.com

The News Agency of Nigeria, reports that the fight broke out following a dispute between the monarch and some sections of the kingdom on whether to hold the Manhood Initiation Celebration during Eid-el-kabir.

The fight was said to have started on Tuesday morning when the police allegedly destroyed the “local shade’’ set up to mark the initiation ceremony by a section of the kingdom.

Following the development, a hot argument ensued between both parties which led to an exchange of gunfire.

NANlearnt that the police moved to the community to maintain law and order.

Chairman of the local government, Dr. Bruno Oshonebo, told NAN on the telephone that the South Ibie Kingdom government recognised monarch got approval from the state government not to allow any manhood ceremony to take place in the kingdom during Sallah.

He said, ”You know there is a long time chieftaincy dispute in the kingdom and each time there is a Muslim festival, there is always a problem.

“However, to forestall such problem, the state government had acceded to the monarch, who the government recognises, not to have any form of manhood celebration in the kingdom.

“This is exactly what I am trying to do, to enforce the ban on any form of celebration in the area during Sallah.”

NAN reports that though no life was lost, the situation has been brought under control by policemen and soldiers.

The Divisional Police Officer in Auchi, Mr. Ahmed Umar, confirmed the incident and blamed the people for flouting government’s order.

Umar said the order to ban any form of `manhood celebration’ was to allow peace to reign during Sallah and beyond. (NAN)
Continue Reading
You may also like...
Related Topics:aboriginal, Auchi, celebration, edo, Etsako, manhood initiation, rituals, south ibie kingdom