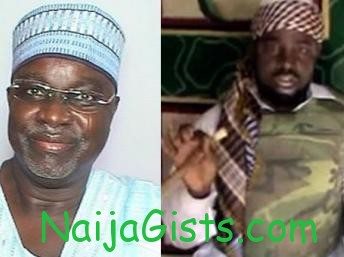 The senator who was invited for interrogation arrived at SSS headquarters in Abuja around 1:00pm yesterday.

In his explanation, the senator who is a family member of Habibu Bama, a Boko Haram Kingpin said he gave Boko Haram sect N1.5 Million for Sallah Rams after they threatened to attack him.

He further explained that the sect who took an aide, Habibu Bama to search his house retrieved N250,000 and left a note with Habibu to provide them with N10 million or they’ll come to attack him.

After several hours of interrogation, Senator Zanna was released at around 10pm. He is expected to return back today at 11am.

The aide he was talking about happens to be his nephew, a top Boko Haram sect member, Shuaibu Bama aka Habibu Bama who was arrested at his home last week.

Senator Ahmed Zanna‘s story is not adding up because the Boko Haram’s aide he talked about is his aforementioned Nephew, Habibu Bama.