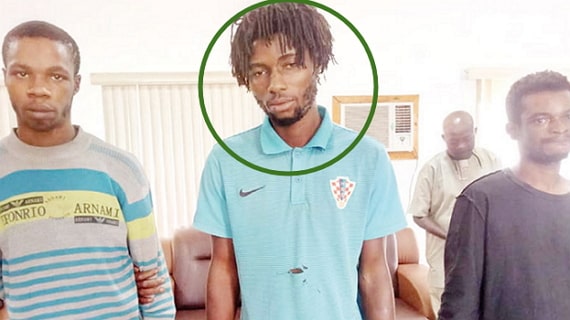 “My Rank In Eiye Confraternity Is Called Dove, Cultism Is A World Of Deception” – Arrested Cult Member Warns Youths Not To Join Cult Groups

Osun Police command yesterday paraded 3  suspected members of the Eiye Confraternity, whom it accused of causing the death of many rival cult members and members of the public.

The suspects are Afeez Alade aka Esubiyi; Seyi Adesoji and Sodiq Olatunde.

Parading the suspect before journalists, the Osun State Commissioner of Police, Mr Fimihan Adeoye, said the 28-year-old Alade was arrested after several months of trailing him.

He said the suspect was arrested at the Jaleyemi area of Osogbo during a stop and search operation by the police on December 6, 2018.

Responding to questions from journalists, Alade said he stayed away from criminal activities after he got married in 2016, adding that he was caught when he came to return a gun belonging to the Eiye group that was in his custody.

“I joined the Eiye Confraternity in 2009 while in school, where I studied accounting. I became notorious after I was shot and inflicted with machete cuts in different parts of my body by the rival cult members. I was supposed to forgive but I didn’t do that.

“My rank in the Eiye Confraternity is called ‘Dove’. I am the number eight in my group. I didn’t kill many people. I only killed Bode. Bode belonged to Axe Confraternity. I shot him during a fight between my group and his group. He didn’t die immediately; I was told he died later.

“I also shot one member of the Axe Confraternity. I shot him in the eye and the gunshot blinded him. After I did all that, I got married in 2016 and I left Osun State.

“I stayed in Lagos with my family and I was no longer involved in the activities of my group. But in December last year, members of my group started calling that I should return their gun. I was in Osogbo that evening to return the gun when I was caught.

“I deserve whatever my judgement is, but I advise youths not to join cult groups; it is a world of deception. I pray for mercy. If God can spare me, I will never get involved in criminal activities again.”