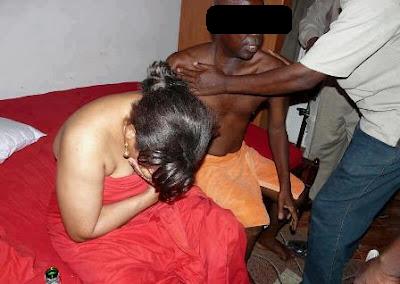 There was drama in Highfield, Zimbabwe on Sunday night when a married, female pastor was evicted from her matrimonial home after she was reportedly caught pants down with a married man in their matrimonial bed.

Pastor Tsitsi Mukwamba, was reportedly caught by her husband after news that she was having extra-marital affairs with young males reached her husband. The man whom she was caught with in bed reportedly died mysteriously the same day.

Police spokesperson confirmed the sudden-death report after a misunderstanding between the deceased and his girlfriend.

“And police are treating it as a suicide case and investigations are in progress,” said InspChibanda. Our news crew visited the house on Sunday night and found multitudes of residents milling around the house intending to mete instant justice on Pastor Tsitsi. Police had to be called in to control and disperse the crowd and she was smuggled out of the house by her husband who went and dumped her at Machipisa Police Station.

“We want to teach her the correct way she is supposed to preach to the congregation when she is called the woman of God at church,” one of the residents was heard saying.

Confronted for comment, the husband, identified as Baba Anesu said: “This is a family affair which does not need media coverage. There is nothing going on, people just want her to pay back their debts.This is just mob psychology,” he disguised.

Tsitsi could not entertain questions and she sought refuge in a cab before it sped off. The now deceased man is understood to have narrated everything to his wife and was rushed to a local doctor where he died that very night.