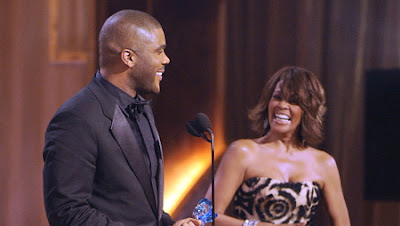 Here is a touching tribute to late singer Whitney Houston by Tyler Perry.

For many years, I couldn’t turn my ringer off on my phones because my mother was very ill. My phone would be on all night. This is tough for me because I’m the type of man who loves to be in pure quiet when I’m home. No TV, no radio, no nothing. Just quiet. Mainly because there is so much noise in my life.

After my mother died in 2009, I started turning my ringer off without the fear of missing a very important call. After you lose someone you love, nothing seems very important. So I was at my house in L.A. last year on February 11th, dreading facing February 12th. That would have been my mother’s 67th birthday.

I’m always a little sad around that time but that morning started out okay. I thought I wouldn’t be able to get through the 12th. All I had to do was protect my spirit, let me just leave the TV off and turn the ringer off so that I could not be reminded of the grief that I had been enduring.

I decided to turn in early. I was getting in the bed and my cell kept lighting up. So I finally looked at my phone and I had text about Whitney. The one that was most shocking was a friend who said, “Tell me it’s not true.”
I immediately knew what that meant. I tried to call Pat, her sister-in-law, but couldn’t reach her. Within a few minutes Pat called me back and asked me to come down to the hotel.

I went to the Beverly Hilton Hotel, got out of the car and I thought it was some kind of sick joke. There were hundreds of people standing around, laughing, drinking and screaming for autographs from celebrities as they arrived for a Grammy party.

People were screaming my name and taking pictures as I pushed through the crowd. I went up to the floor and saw the police and coroners outside of the room. I went into the room and Whitney’s family was broken down, inconsolable.

We must have been right above the party because there was a glass of water on the nightstand that was vibrating from the bass and the screams below. It was so surreal.

Such a juxtaposed position to see this family breaking down and hear laughter and cheers from below us. It really made me think about her life. While her voice brought so much joy, there was so much sadness inside of her.

As I am seeing all these tributes to her on this one-year anniversary of her death, I want you to know something: Whitney was a fighter. She really tried to get herself together.

We can keep her daughter and her family lifted up in prayer. We can also pray for other people in this business, especially these young people who come in so bright eyed and eager, only to have it tear at their very souls.

I thank God I didn’t become successful until I was older. The younger you are when you start in this business, the more at risk you are. Speaking of that, we can also pray for the children of these people. If you only knew what people in this business have to endure to sit in their seat. I’m not asking you to feel sorry for anyone. I’m simply asking you to pray for us all.God bless. Miss you Whitney.