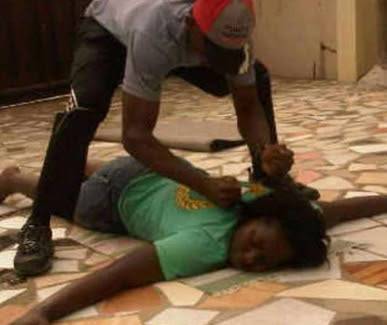 August 2nd, 2017 – Married Man Kills Mistress On Her Birthday After He Caught Her Speaking With Ex-Boyfriend

The birthday of a lover girl, Happiness, ended in tragedy at the weekend, as her boyfriend, out of jealousy, ended her life for talking with her ex-boyfriend.

It was gathered that the deceased’s lover, Victor, Umeh hosted a birthday party for her in a hotel on Ago-Palace Way, Lagos. While the party was going on, the man saw the lady conversing with her former boyfriend and left in anger.

Happiness was said to have returned to Victor’s home after the party and a quarrel ensued.

A neighbour said: “We heard them quarreling, but we thought it was a normal verbal war, until we did not hear Happiness. We decided to find out what was happening, only to meet the lifeless body of Happiness.

“When Victor saw us, he tried to escape, but we held him and quickly alerted the police from Ago-Okota Division, who came to the scene and arrested him.”

The Divisional Police Officer (DPO), Ago-Okota Police Station, Mr. Yusuf Abdul, confirmed the incident. He told Daily Sun: “On Saturday, July 27, 2017, around 12 midnight, one Osuh came and reported that they heard loud screaming coming from his neighbour’s apartment. He said when he came out to find out what was going on, in company with others, they saw the lifeless body of Happiness whose address and surname are unknown.

“We arrested one Victor, whom the deceased visited, as he was trying to escape. In a bid to frustrate investigation, the suspects hid the deceased’s phone on top of a fence after inserting it inside a packet of cigarettes that contained Indian hemp.

“During interrogation, the suspect told us that they went to a club along Ago-Palace Way to celebrate the deceased’s birthday but when they got there the deceased started talking with her ex-boyfriend and he left in anger for his house. Shortly after he got home, the deceased came to meet him and they had a fight that led to her death.”

When Daily Sun spoke with the suspect, he said: “I did not kill her. Someone else did because, I met her lifeless body outside my house.’

Happiness’ body has been deposited at a public hospital for autopsy.