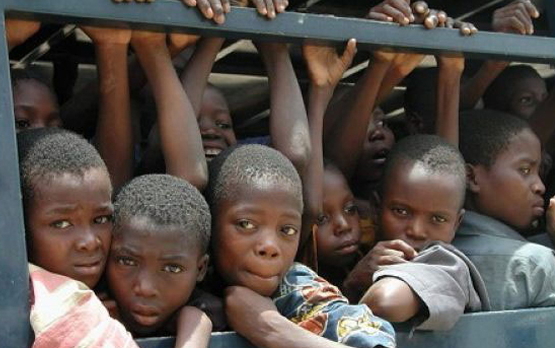 NSCDC Command in Ekiti has apprehended two suspected child traffickers on transit from Benue State to the Southwest states.

The two suspects, Stephen Udoh, a driver and Ede Thomas, the gang leader, were nabbed about 1 p.m. on July 28 on Ado-Ikere Road, with their 32 victims aged between eight months and 23 years.

The children, who are pupils and students of primary and secondary schools and of Benue origin, were being trafficked to Ekiti, Osun and Oyo states for child labour and prostitution in an 18-seater Toyota Hiace bus, registered as BENUE UKM 133 XA.

State NSCDC Commandant Mr. Donatus Ikemefuna said some of the victims confirmed that Udoh and Thomas promised them jobs and good salary.

He said the suspects were fond of trafficking children between ages five and 18 to those states, describing child trfficking as “terrorism and slave trade in the 21st Century”.

Ikemefuna explained that the two suspects had been on its watch list for over two months.

“During preliminary investigation, some of the victims confirmed that the duo of Udoh, a driver and Thomas promised to give them jobs with good monthly wages in Ado Ekiti, Igbonla in Ondo State, Ogbomoso and Oyo towns without details of the kinds of jobs, but this has proved overtime to be child labour in the fashion of house girl and prostitution.

“The victims confirmed that Thomas facilitates the business trips every month on special request from these states. Most of them affirmed that their parents are in the picture of the crime.

“The need to apprehend the suspects became necessary because the calls were much on the spate of child trafficking to Ekiti State, which can pose a threat in the nearest future. The importation and exportation of underage to NSCDC is terrorism.”

“We are talking of 32 children here. Children are not goods that we export and import. The little kids are cooperating, likewise the driver and the manager and I can assure you that the matter will be thoroughly investigated.

“We are handing them over to NAPTIP for proper action, because it is always in our culture to hand over culprits to proper government agency for actions.”