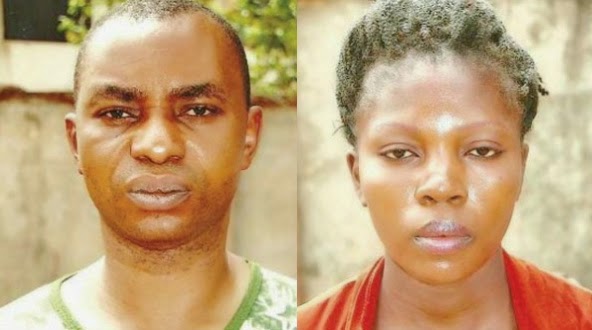 The pastor was said to have wooed Chia­maka on facebook in December 2013 and promised her marriage. Using preparations for the marriage as a bait, the clergy alleg­edly swindled the lady over N4 million.

He was arrested by police detectives at his No 42 Odudukoko street, Gariki Awku­nanaw, Enugu State on April 13 following complaints filed by the victim.

The state Commissioner of Police, Mr. Mohammed Adamu, who confirmed the ar­rest, told Saturday Sun that the suspect and his younger brother, Tobias Aniude serving a jail term in Enugu prison, were notori­ous for using facebook to promise innocent women marriage and eventually dupe them.

The pastor’s younger brother, Tobias was said to have been arrested for kidnap­ping and armed robbery and later remanded in Enugu prison in March. In the prison, Tobias was alleged to have continued using facebook to scam more innocent Nigerians.

The victim, Chiamaka, who works as a sales girl with her brother, Emmanuel Mon­day Ojiaku at Mokola, Ibadan, Oyo State, was said to have diverted proceeds from sales in her brother’s shop to meet the de­mands of Pastor Aniude.

Police investigations revealed that the cleric started coming to meet Chiamaka in Ibadan in July 2014 during which he began to collect money ranging between N300,000 and N700,000 from the victim.

By September 2014, the cleric was said to have fixed last December for their wed­ding with instructions to Chiamaka to start buying wedding cloths. He, however, came up with a lie that he had an accident during Christmas and as such the wedding could not go on as planned.

The wedding was later shifted to Febru­ary 14, 2015 when the pastor again came up with another story that he was attacked by armed robbers and as such the wedding be moved to April 1, 2015, a development that eventually opened the mind of Chiamaka to the reality that she might have been dealing with a con man.

Giving details of what transpired be­tween him and Chiamaka, Pastor Aniude told Saturday Sun: “I am an Assistant Pas­tor with Triumphant Kings Assembly. I have been in ministry for five years now. I am jobless.

“I met Chiamaka on facebook in Decem­ber, 2013. I promised to marry her. Then, she started sending money to my bank account in Enugu. I visited her at Ibadan twice and collected the sum of N1million from her.”

He further explained: “I have to send my wife away with my two kids from my house to Aba. When I told my wife that I wanted to marry a second wife but she refused, that prompted me to send her packing.

“I used part of the money Chiamaka was sending to buy a car and built a bungalow in my village at Nochele Ndeaboli in Aliri Local Government Area, Enugu State.

“I deceived her that I wanted to marry her on Christmas day, December 25, 2014. I also lied to her that I had a motor accident. I rescheduled it for February 14, 2015. I lied to her again that armed robbers attacked me. I rescheduled it for Easter period, April 4, 2015 before the police anti-kidnappers squad arrested my wife, my Pastor Sam Ezenagu before I was arrested”.

In her own account of the scam, Chiam­aka explained: “I met Pastor Abel Bernard Aniude on facebook in December 2013 and we started chatting on facebook. Pastor Abel deceived me that he wanted to marry me. I worked in the shop of my brother, Emmauel Ojiaku who sells electronics in Ibadan. I started to send N700,000 and N300,000 to Pastor Abel through his UBA and Diamond account numbers”.

She pleaded that her brother should for­give her. “My family should forgive me. I was deceived. I have learnt my lesson in a hard way”, she said.

The victim’s brother, Emmanuel Oji­aku stated: “Chiamaka is my blood sister. She was in the village in Nnewi, Anambra State where one guy impregnated her and later the guy denied the pregnancy, she de­livered the baby and after sometimes, the baby died. I went to the village in Nnewi and brought her to Ibadan to stay with me so that she will not suffer”.

On how Chiamaka was able to have ac­cess to his money, Emmanuel said: “I deal in electrical appliances in Ibadan. I took my sister, Chiamaka to be like a sales girl. Sud­denly my wife took ill and had to take her to India for treatment.

“Chiamaka was in charge of my shop. I didn’t suspect her rather I handed over the shop to her. It was March 27, 2015 when Chiamaka came back from the shop and I discovered that she was having N1700, which led to searching of her room and I discovered N65,000 under her bed. I brought out cutlass and threatened her and collected her phone before she confessed to me that she has sent over N4 million to Pas­tor Abel.”

The General Overseer of Triumphant Kings Assembly, 47-year-old Pastor Sam Ezenagu where Pastor Abel works as Assis­tant Pastor told Saturday Sun: “I was doing counselling in my church, four years ago when Pastor Abel walked in and told me that he wanted to assist me in my ministry. We started working together. Every Sunday service we always give him N3,000.

“Suddenly, Pastor Abel brought a Honda Sport car and we celebrated it and asked him where he got the car. Pastor Abel told me that it was one of those he prays for that gave him the car. The church rejoiced with him. Also, in some months, I will not see Pastor Abel and if I call him, he would tell me he was doing some business some­where.”

Pastor Ezenagu added: “It was April 12, 2015, Pastor Abel called me that police­men has arrested his wife. I ran to Aba. I asked whether there is any problem, I took a lawyer along with Pastor Abel and that was how he was arrested. Pastor Abel had to confess that he always dupe some ladies on facebook and how he got involved in the N4 million scam.